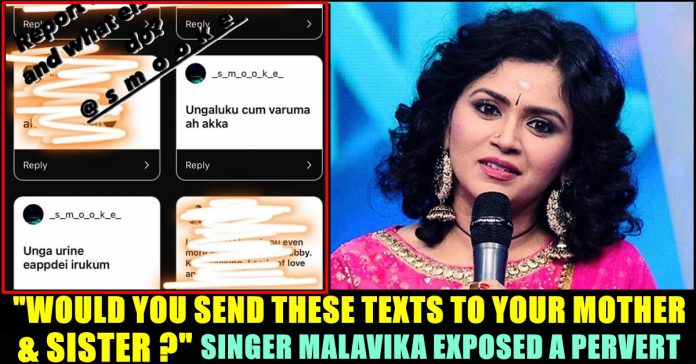 Social media is definitely not a good place for cinema/television celebrities, especially for female celebrities as they are receiving trolls, abuses, obscene texts from perverted men in a constant manner. People in social media platforms such as Instagram, Twitter and Facebook often thinks that the things they are sharing in a private inbox of someone else is going to stay private forever. But they must realize that it would become public sooner than they think and would spread faster than they assume.

Singer Malavika who rose to fame among Tamil television through her stint in Super Singer show of Vijay TV, exposed a miscreant who sent disgusting texts to her in the photo/video posting social media application. She shared a series of tweets in the story section of her Instagram account and shared about the trauma she went through by uploading a video.

After raising to fame through Super singer show, Malavika sung a number of songs in the film industry under the composition of prominent music directors such as D. Imman, G.V Prakash, Anirudh etc. She is pretty much active in Instagram and is currently enjoying 2 lakh followers. She has been sharing about her daily routines, work updates and pictures from her photoshoots through the social media space.

On Tuesday, she shared a series of shocking screen shots where we could see a man sending abusive, obscene, disgusting texts to her without considering about the consequences he is going to face. Sharing the screen shots, Malavika, in a video severely condemned the miscreant and asked women to voice out. She also asked her followers to report the pervert and asked what else one can do about such creatures.

Here’s the screen shots shared by her :

The singer appeared in a video and said that it is not the first time she is receiving such texts. “It’s not gonna bother me like how it did at the first time. It makes me feel disturbed while seeing such texts. It is happening in social media in a wide range.” said Malavika and went on add what the abuser did after she shared his messages in her story.

“As soon as I shared the story, the guy came to my inbox and said “Sorry Akkaa . . My friend did it” and all that. People who are sending these kind of texts must have women in your lives, ain’t they ??. Would they send such messages to them ?? Would they feel if anyone send messages like that to them ??” she questioned.

“Many people asked me to ignore such people. That’s the only option. What could we do ??” said Malavika and asked women to feel free to share with their closest ones while coming across such messages. “Don’t even feel bad to put in on social media. People who are sending such messages are not feeling ashamed of it and there is no necessity for us to be mum” she requested the women in her social media.