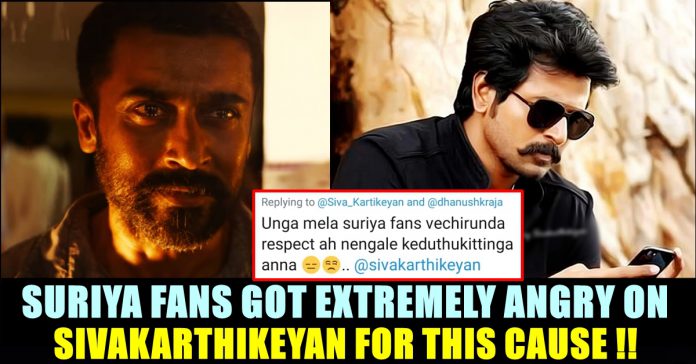 For not wishing actor Suriya on his birthday which was on 23rd of July, few fans of the actor, questioned Sivakarthikeyan on why he is not posting a tweet for their favorite actor by showing the screenshots of himself wishing actors Vijay and Ajith who are not active in Twitter. On 28 of the same month, when actor Dhanush celebrated his birthday, Sivakarthikeyan posted a tweet which triggered the fans of Suriya again.

Sivakarthikeyan , an actor in Kollywood film industry is an inspiration to enormous number of Tamil youngsters today. The path he came through to become one of the leading actors in Kollywood made many to follow him. Many of his fans are seeing him as their representative and he who was just a TV anchor 8 years ago, now holding a huge responsibility on his shoulders as millions of kids and teens are following him.

He was last seen in Namma Veetu Pillai and Hero directed by Pandiraj and P.S Mithran respectively. Being one of the busiest actor in Kollywood industry right now, Sivakarthikeyan is having commitments for nearly half a dozen movies, including his third production venture “Vaazhl”.

The actor who is pretty much active in social media, recently gained 6 million followers in Twitter and celebrated it by uploading a picture of himself, thanking his fans and followers. On Tuesday, Siva posted a tweet wishing actor Dhanush with whom he collaborated in a number of projects during his initial stage. Despite of the alleged confrontation between the duo, Sivakarthikeyan posted a tweet writing “Happy birthday Dhanush sir..Hv a grt year”

This tweet left many online fans of actor Suriya dejected and they expressed their disappointment in their comment section. They asked why he wished actor Ajith who is not even having an account in Twitter and missed out wishing Suriya, their favourite actor. Few fans went one step ahead and started abusing the actor to vent their anger out.

On the work front, Suriya’s “Soorarai Pottru” is awaiting for the lockdown to end and his project with Vettri Maaran titled as “Vaadi Vaasal” is also waiting to go on floors post lockdown. Sivakarthikeyan’s Doctor and Ayalaan is expected to hit the big screens as soon as the lockdown ends.