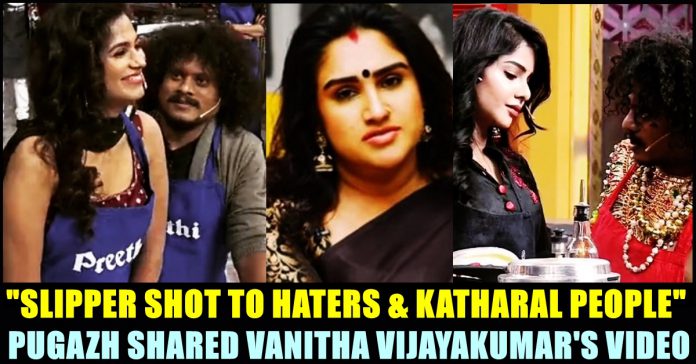 The reality show “Cooku with Comali” which garnered huge viewership for its first two seasons, demands a seasoned cook to join hands with a comedian to make delicious food items in order to impress the judges of the show. The show became a massive hit among the Television and Internet audience. Not only the women, even youngsters including college, school students started celebrating the show as it mainly concentrates on providing humour unlike other cookery shows.

Pugazh who initially grabbed the attention of the audience through his quirky look, made them to celebrate him with his timely counters and mischievous behaviour in the episodes of the show which has chef Dhamu and Venkatesh Bhat as judges. In season one, his antics with actress Ramya Pandiyan in the name of “romance” won hearts.

Now, Vanitha Vijayakumar, title winner of season one, talked about how the channel makes content out of the incidents that are taking place in the show. “Everything that are taking place in the show are “content”. I have never seen a decent gentleman like Pugazh. After director says cut, he would act like that he doesn’t know who Ramya Pandiyan is” says Vanitha Vijayakumar in the interview.

“It is just a content that is created for the show. Behind the screen, there is nothing like Pugazh romancing Ramya Pandiyan and all. She will do her job and we can’t even find where Pugazh is” said Vanitha Vijayakumar about the “Cooku with Comali” show and the relationship between Pugazh and Ramya.

The video was shared by a fan page of Pugazh with a caption saying “Slipper shot to those haters and Katharal peoples”. In a way of endorsing her statement of Vanitha Vijayakumar and the caption added by his fan page, Pugazh shared the video in his official Instagram account, through which he is enjoying two and half million plus followers. Check out the screen shot below :