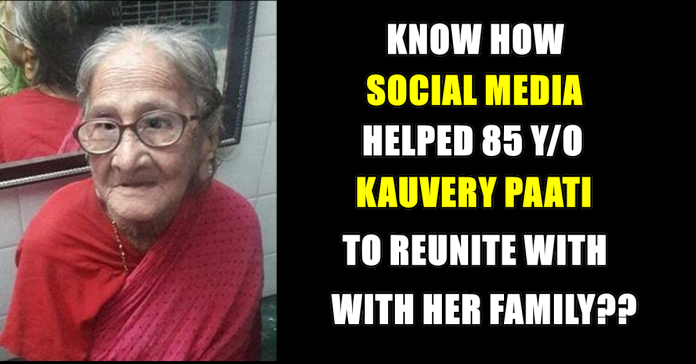 In yet another instance of how social media can be effectively used for a good cause, an elderly woman from Chennai, who lost her way, was reunited with her family on Friday.

On Friday morning, Twitter was abuzz with the picture of an elderly woman, clad in red saree and blouse and wearing spectacles. A message along with it in Tamil and English read as follows: “Kaveri, 85, wife of Srinivasan, has lost her way. She only remembers her name and that of her husband. She is now in D3 police station..Share this message till she is reunited with her family.”

The D-3 Ice House police station Inspector K. Krishnamoorthy said it was his team that spread the message on their police WhatsApp group and social media.

“We got information about an elderly woman who had lost her way and was wandering near the temple. My team went and brought her to the station. They gave her some refreshments too. Every one in the station affectionately called her paati (grandmother),” said the inspector.

When asked about her address, the woman told the police that her house was near Government Kasturba Gandhi Hospital for Women and Children.“She called it by its local name: Gosha hospital. We took her to all the localities around it, but could not locate her house,” said the officer. The police finally took her to an old-age home and admitted her there. “By evening, our message had spread like wildfire on social media. People from across the country, including officers from the Mumbai Police Commissioner Office, called the police station to inquire,” added a senior police officer.

Finally, by evening, a relative of the woman came to the station. According to her, Kaveri had come out of an old-age home in Mylapore and did not remember her way back. “The relatives had contacted the Mylapore police station and were directed here. She is still in the home,” said the officer.

Many people had showered their concern on Kaaveri paati on Twitter and some even offered to take her home if no relative came forward.

Some tweets talked about using Aadhaar biometric data to identify her family, and trace them.

A tweet by MumbaiPolice stated that they had spoken to Sub-Inspector Govindaraj of D-3 Police station and he told them that the old lady had been reunited safely with her family.