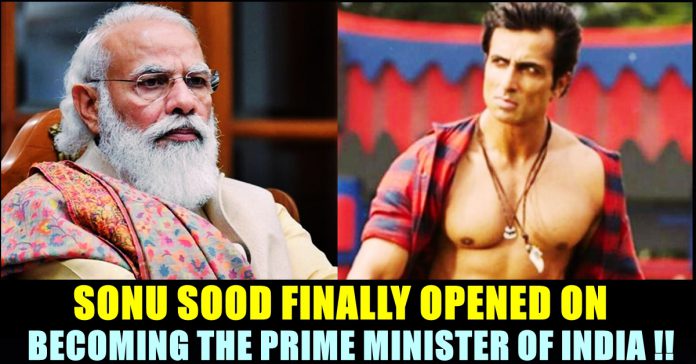 Bollywood actor Sonu Sood who is winnings hearts of the public for reasons more than one, answered on becoming the Prime minister of country India. He is being hailed by the public as “Messiah” which means saviour and a number of people demanding the government to provide him “Bharat Ratna” award as well. He has been helping people who are reaching him since the emergence of COVID 19 virus in India. On seeing him having an heart to serve people, a number of social media users asked him to content for the post of India’s Prime minister. However, the actor politely answered the requests by declining the choice of running for the post of India’s PM.

A video of Sonu Sood serving the paparazzi drinks surfaced in Internet on Tuesday. The video shows the bunch of reporters surrounding the residence of Sonu Sood to click pictures of him and to interview him. While serving drinks to them, the photographers questioned Sonu on the latest demand of himself running for the PM post of India.

Replying to them, Sonu Sood politely said “Hum aam insaan ache hain bhai, aam insaan better hain (I’m better off as a common man).” On the idea of entering politics, Sonu sood termed politicians as his brothers and said that they are fighting in the elections and added that he has nothing to do there. He ruled out it entering politics from his list of works. “Bhai log khade hain na humare, kya karenge elections mein khade ho ke? Woh apna kaam nahin hai na (When my brothers are fighting elections, what will I do there? That’s not my work).” Sonu said.

The reporters were quoting the tweet reply of popular comedian “Vir Das”. Actress and Dancer Rakhi Sawant recently endorsed Sonu Sood as next Prime minister of India along with the enormous number of people in social media.

To install oxygen plants at various places in India, Bollywood actor Sonu Sood who is currently helping people in getting the medical facilities, is going to bring oxygen plants from France and other nations, according to reports. The actor is planning to install at least four of the oxygen plants in the worst-hit COVID 19 states of India, which includes Delhi and Maharashtra.