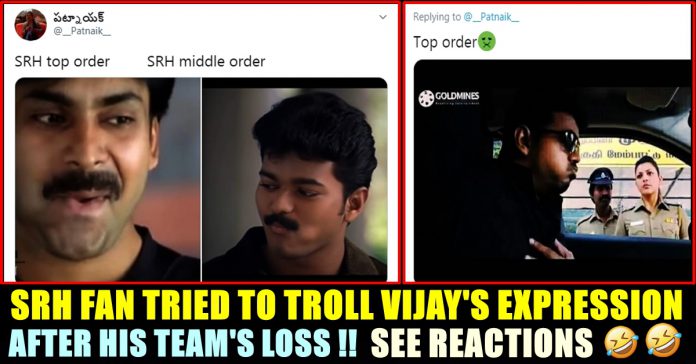 After Sunrisers Hyderabad’s middle order terribly collapsed during the chase, a fan of the team made fun of their batting performance by trolling actor Vijay’s expression from “Kushi” movie directed by S.J Surya. He compared the expressions of actor Vijay and Pawan kalyan only to get trolled by the fans of the “Thalapathy” actor.

RCB managed to score 163 runs with the help of debutant Padikkal’s quickfire half century. SRH looked set to win during their chase, but the crucial wickets of Manish Pandey and Jonny Bairstow, both thanks to Yuzvendra Chahal, turned the tide in RCB’s favour. The leg spinner also took the wicket of Vijay Shankar on the very first ball he faced. Chahal was the star bowler for RCB, notching some three crucial wickets. Mitchell Marsh came in to bat as a 9th down as he got injured while bowling.

Rashid Khan also got out after collapsing with Abishek Sharma while running between the wicket which costed Sharma’s wicket. Navdeep Saini and Shivam Dube chipped in with two wickets as well, as the Virat Kohli-led team got off to a winning start. Chahal declared as the Man of the match.

Despite of Umesh Yadav’s poor bowling performance and several drop catches, SRH couldn’t clinch the victory due to the middle order collapse. In a way of mocking the performance displayed by the middle order, a Telugu speaking cricket fan, uploaded a comparison post of Vijay and Pawan kalyan.

On seeing this post, many users of the micro blogging social media site, initially thought that it is a troll post targeted on Pawan kalyan. Later, they realized that it is meant for Vijay and started reacting accordingly. The original Tamil version of Kushi released on 19th May of 2000 whereas Telugu version of the same movie released on 26th April of 2001. Both of them were directed by S.J Suriya. Referring to the fact, fans of actor Vijay said that Pawan Kalyan is the one who imitated Vijay’s expression and not the other way around.

Check out some of the replied his tweet received :

Pk coppied mannerism of vijay
Its is first done by vijay

In film remaking vijay movies and getting trolled by his own fans…in politics copying jagan and getting slipper shot😂😂😂😂 pic.twitter.com/on7krbS3CC

Comment your views on this comparison of the SRH fan !!