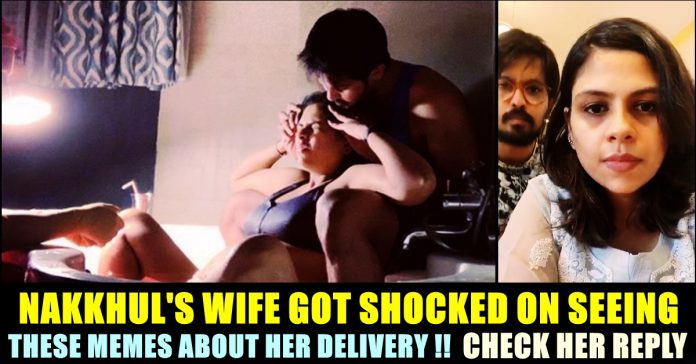 Actor Nakhul’s wife Shruti came up with an elaborated post to make things clear about her pregnancy and “birth giving” experience which is being misinterpreted by a number of social media meme pages. Actor Nakkhul and his wife Sruti blessed with a baby girl on 2nd of August and the actor shared it happily in his social media handle. Sharing a glimpse of his daughter to the world, the actor wrote “And just like that , our lives became a lil more magical ! ✨Baby Khulbee – Daddy’s Girl and Mommy’s World” in his post.

Nakkhul married to his long time girlfriend Sruthi Baskar on 28th February of 2016. The adorable couple has been sharing the cutest moments of them together in their respective social media accounts. Exactly after a month of their baby’s birth, Sruthi shared how she gave birth to her baby in Sanctum birth center with the assistance of a midwife named as Vijaya from the birth center instead of giving birth in a hospital.

Here’s the post she uploaded explaining why and how she gave birth to Akira in a birth center :

Akira turns a month old today and honestly it’s still feels so so surreal for @actornakkhul and I that we went driving all the way to Hyderabad along with our 4 cats when I was 32weeks pregnant ! Many of them asked us “ Why Hyderabad? Why alone ? How can you both manage alone ? “ Here’s the answer. @mayas_amma is one of the main reason for us to take this huge step and for educating us and many other to be parents about respectful birthing and evidence based research on pregnancy, postpartum and lactation. It was truly eye opening and so much fun to attend her classes. Tho we have never met Swati in person, we always feel like we have known her for years ! I have laughed so much through her classes and even had tears listening to the good and bad experiences that women deal with during and after pregnancy ! We love you so much Swati ! Without you , we never would’ve come to @sanctumbirthcenter ! . . Vijaya Ma’am our amazingly sweet midwife from @sanctumbirthcenter ! She’s truly a wonder woman! I remember trying to get an online consultation here in Chennai with so many gynos to talk about birthing options. Some didn’t even give us more than 3 minutes of their time. Vijaya Ma’am was on a video call with us for close to an hour and answered to all my queries so patiently that too right after attending to another labour! That very night, @actornakkhul and I decided that we are not going to deliver anywhere else but only at @sanctumbirthcenter ! You can see in the pictures, my wonder woman who helped me through my 12 hour labour, like a mother comforting her own child ! Those kind words that you were whispering to me when I was undergoing so many emotions was just absolutely something I can never forget. I honesty wish and pray that every single woman should have this kind of respectful and gentle birthing option ! Birth truly takes a woman’s deepest fears about herself and shows her that she’s much stronger than them ! I urge all women and their spouses to please please do your own evidence based research and not just blindly follow something or someone. Trust me…when you train hard , you can fight easy ! 🤍 . #nakkhulsrubee #khulbeetails #waterbirth

By just seeing the pictures Sruthi shared, many Tamil meme pages started canvassing that Sruthi gave birth to her child in her own home and influenced everyone to do the same. They appreciated Nakkhul and his wife believing that they gave birth to their baby by ignoring hospitals.

On seeing such posts, Sruthi came up with a long post reiterating that she gave birth to her child at a legal birth institution run by professional midwives who have amazing credentials with a back OT/OBYGN in case of an emergency.

Check out the series of photos she uploaded to clear the air :

Here’s the post of Shruthi. Swipe to see next pictures :

At the the cost of repetition, @actornakkhul and I didn’t give birth to our daughter in a spa or hotel or home !!!!! It’s really saddening to see certain pages spread wrong information. Do watch my IG live with my midwife Vijay Ma’am to know more about our informed and respectful birth which happens in a LEGAL institution run by professional midwives.