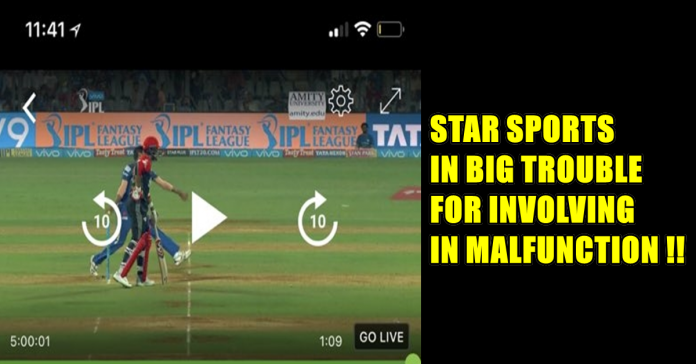 In the Indian Premier League (IPL) encounter between Mumbai Indians and Royal Challengers Bangalore at the Wankhede Stadium on Tuesday, the win by the hosts was a comprehensive one. The Mumbai team posted the first win of the IPL 2018 as they beat Virat Kohli led RCB by 46 runs. Put in to bat first, MI made 213/6 in stipulated 20 overs and then with smart bowling restricted RCB to 167 for 8 in given 20 overs to open their account on the points table. No one can take away the hard-earned victory from the Mumbai team but there was an incident which puts the broadcaster, the umpiring in the MI vs RCB game under poor light.

As reported by ESPNCricinfo, the third umpire probably looked at the wrong replay to check on no-ball to give a decision on Umesh Yadav. On the last ball of the 18th over by Jasprit Bumrah, Yadav was caught by Rohit Sharma as he slogged the ball to cover. The on-field umpires turned to the third umpire to check on Bumrah’s no-ball. The replay played at that point of time by the broadcaster showed Bumrah’s foot inside the crease. It was later noticed by many that in the replay Umesh Yadav could be seen at the non-striker’s end. On looking at the replay, even the commentators were puzzled that why the on-field umpires asked to check for no-ball if Bumrah was in bounds by a margin. “No need to go (to the third umpire) for that,” commentator Sunil Gavaskar had said.

While this decision did not pose a significant change in the end result as RCB were already reeling at 137 for 7 while chasing massive 214 with 13 balls left. However, it would have courted huge controversy if the error would have occurred at any other critical stage of the game.

This technical error occurs when the replay operator clicks twice, thus going to the replay of the previous delivery instead of the current one. The third-umpire should have been the one to correct this but these errors have gone unnoticed in the past as well.

The third-umpire came in question towards the end of Mumbai’s innings as well when Chris Woakes thought he had Hardik Pandya dismissed. The on-field umpire gave it out and Pandya decided to review it. Ultra-Edge showed a small spike as the ball crossed the bat, however, the third-umpire reversed the decision to not-out.
Luckily, the technical error did not have a bearing on the final result of the match. These type of errors have taken place in the past and in order to reduce them, the third-umpire should be slightly more vigilante while viewing the replay and ensuring the correct one is showed on the screen.