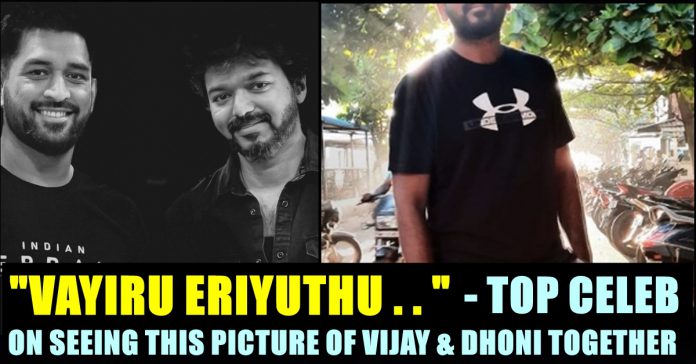 Director Vignesh Shivan who is an ardent fan of Mahendra Singh Dhoni, uploaded a tweet saying that his stomach temperature increased to 274 degree Celsius on seeing the picture of Director Nelson Dilipkumar posing with Thalapathy Vijay and Thala Ajith. The filmmaker expressed his displeasure over his friend not inviting him to meet his idol at the Gokulam studios where the pictures of the two most famous faces of Tamil nadu were captured. The tweet of Wikki is going viral among the fans of the duo with various kind of reactions. Apart from fans, many other celebrities expressed their awe over Dhoni and Vijay posing for a picture after 13 long years.

A series of pictures that shows actor Vijay who is fondly called as Thalapathy by his fans and former Indian captain and current captain of Chennai Super Kings MS Dhoni together are going insanely viral in social media platforms with the overwhelming reactions of fans flooding the feeds. The meeting between the duo took place as both of them were shooting at Gokulam Studios that is located at Chennai for their upcoming projects.

It has been reported that Vijay was busy shooting for his upcoming film “Beast” at Gokulam studios where Dhoni made his presence for the shoot of a commercial. The last time Dhoni and Vijat met each other was, during the inaugural season of India premiere league. Actor Vijay was appointed as the brand ambassador of team Chennai Super Kings which is being led by Dhoni till today. The old pictures of the duo together is also trending in social media platforms right now.

Among the many, a picture of Director Nelson Dilipkumar posing with the duo also surfaced from the official handle of the filmmaker. “#BEAST & #LION, #DOUBLEBEASTMODE” read the caption of Nelson’s post.

On seeing this picture, Director Vignesh Shivan who is known among audience for directing “Naanum Rowdy Thaan”, “Thaana Serntha Kootam” etc, uploaded a tweet expressing his emotions. The filmmaker felt that Nelson who is his best friend, could have invited him to the studio. “Oru vaartha…. Sollirukalaam…. !!! Stomach temperature 274 degree Celsius at the moment !! Send me the raw file Nelson Dilip kumar …. will atleast do photoshop version for me” Vignesh said in his tweet.

Not stopping there, Wikki went on to photoshop the picture with himself in it and shared it in his official Instagram handle as well. He added the template “Enaku vera vazhi theriyala aatha” to the photoshopped picture. Here’s the screen shot of his story :