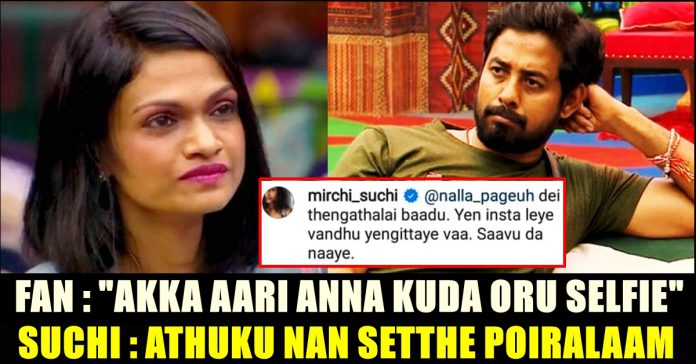 Mirchi Suhci’s replies to her followers who commented on her most recent post in Instagram made netizens to think her account got hacked. The playback singer who entered the Bigg Boss house as a wild card contestant, thrashed Aari who won the title and said that he is a stooge of Kamal Haasan. She also thrashed a number of followers who criticized her looks.

Suchithra who entered the house as a “wildcard entrant”, spent three weeks in the Bigg Boss house. While getting evicted, Suchithra said to Kamal Haasan that her father appeared in her dreams and told her to get out of the house as nothing about her were telecasted. She also expressed her fear of mass trolls and criticisms in social media. Comparing to other contestants, Suchithra had a very short span of time to grab a spot in the hearts of the audience and failed to do it. Suchithra got nominated for the eviction with 9 votes from the housemates.

After coming out of the Bigg Boss house, Suchithra is pretty much active in social media platforms. During the finale week, Suchi campaigned for Aari and asked people to vote for him through her official twitter account. Most recently, she accused Kamal Haasan of giving her a cloth that is made of fake Khadi during the finals.

Now, she tried a filter in Instagram and uploaded a video which showed “accountant” as her profession. After the filter showed its result, Suchithra said “one plus one is still two, right ?? Just checking” and added a caption writing “Just in case the world has moved over to a Kamalahasan kanakku. #justchecking #kamalsslaves”

Many of the playback singer’s one lakh followers replied to this post of Suchithra. One of them asked her to post a picture with title winner Aari and Suchi replied to him saying that she would die instead. When another user asked “you liked Aari, ain’t you ?” Suchi replied “no. I don’t like him. But his stupid ego would get satisfied only if he won that silly show, so I supported. Devil’s advocate much.”

Here’s the screen shot of her replies :

To another user, Suchi said that Aari is a stooge of Kamal Haasan. “coz I’m an asshole. Pls feel free to leave my page if you don’t like it.” she said to another follower who asked why she is using harsh words to describe people.

Here’s how Suchi replied to a follower who asked her to wear make up before uploading videos.

The account of Mirchi Suchi is also replying to many other followers of her. It is not known whether the account of Suchithra got hacked. During her final conversation with Kamal Haasan before walking out of the show, Suchi said that Bigg Boss is her most favourite show and added that she entered the house as a fan girl. The radio jockey also said that she wanted to get her singing career back by participating in the show.