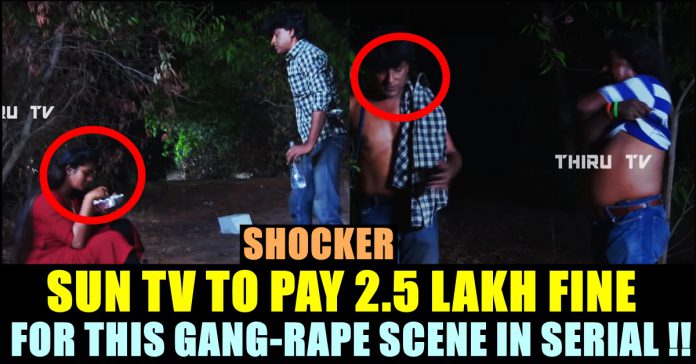 “Kalyana Veedu” is a popular serial which has a huge viewership across the state. The serial is being directed by Thirumurugan who is fondly called as “Gopi” by Netizens. Now the channel SUN TV is in big trouble because of Thirumurugan as one of his serial’s gang rape scene violated the rules of The Broadcasting Content Complaint Council. (BCCC). It is notable that Thirumurugan is the protagonist of the serial and producing it under his Thiru Pictures.

The channel was ordered by BCCC to pay Rs.2.5 lakh as fine and also the Kalyana Veedu crew was forced to stream a 30 second pre-recorded apology video for 1 week from September 23 to 28 to its audience for an untasteful gang rape scene.

On May 14 and 15, the episodes of “Kalyana Veedu” telecasted a sequence which features a female and 4 males. Roja who hires four henchmen orders them to rape her own sister to take revenge. The scene starts with the character Roja explaining her henchmen on how to rape her sister. “The one whom you are going to rape is an unmarried virgin girl. While raping her you must not have mercy in your heart. The thought of raping my own sister must not strike your head. No matter how pitiful her scream is, there should be no mercy. You get it ?” says Roja who also explains the circumstance of the girl they are going to rape.

After hearing everything from Roja, the head of the Gang who is now drunk, decides to rape Roja herself by reasoning her cruelty. “Everything you described is going to happen to you” he says to Roja and forcefully rapes her. After few seconds he comes out of a bush without shirt. “Go Go Enjoy !!” he says to the fellow henchmen while coming. Along with these episode, the episode aired on June 28 was also taken into consideration as the it contained a scene of Roja taking revenge on the rapists with the help of Raja.

Though this scene was removed from Sun NXT app, the youtube Channel, Thiru Entertainment which has more than 10 lakh subscribers still having the video with it and this particular video crossed more than 8,000 views.

According to the report of The News Minute, During the hearing of the case, the BCCC confirmed that those scenes were violated several rules and ordered SUN TV to pay 2.5 lakh fine. As said it also supposed to air an apology video for one long week by accepting the malfunction that occured and by saying that those acts which was showed in the episodes are not constructive and such acts are condemnable in real life.

The serial which replaced Kula Deivam, airs from Monday to Saturday on Sun TV during 7 : 30 to 8 : 00. This show crossed 400 episodes on 5 August 2019 and the 405th episode has been shot without any background music, with no break-shots and with the camera acting as a character in the serial, which is a record in the history of Tamil TV serials. It is notable that Thirumurugan has directed a feature film titled as “Em.Magan” which had actor Bharath in lead role.