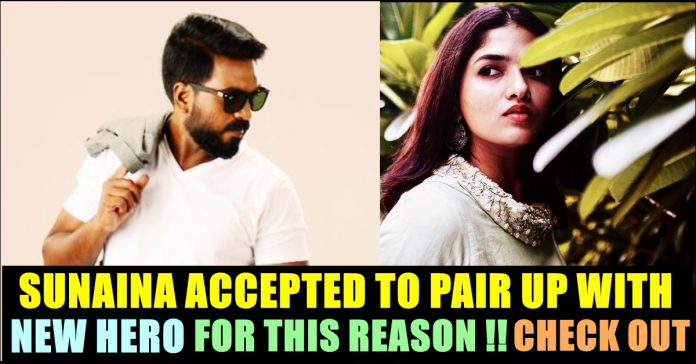 Starting from Kamal Haasan’s Vikram to Rajinikanth’s 2.0, the genre science fiction always garnered generous appreciation from the audience of Tamil cinema. Even recent ventures such as Indru Neatru Naalai and Tik Tik Tik which grabbed the attention of the audience despite of having very simple cast and crew.

Now, This new movie which was titled as “Trip” is in the limelight due to the choice of its castings. The hit combo of Yogibabu and Karunakaran joining hands again for this film after their successful outings in films like “Yamirukka Bayamean” and “Silukuvarpatti Singam”. To our surprise actress Sunaina joined the cast and she will be pairing up with Praveen who is known for his appearance in the “100” of Atharvaa.

Director Denis who previously worked as an assistant director for Sam Anton, while talking about Sunaina’s including in the film said that the character will be a challenging one for her as it requires lot of hard work. He says that he approached many leading heroines in the industry for the role but they denied to pair up with a new hero like Praveen. “But Sunaina understood the depth of her role and the script’s uniqueness which made her to accept it. This character will be considered as one of the best in her career” he added.

Super happy and excited to launch the title of #TRIP .. directed by my asst director @dennisfilmzone .. with by baby darling @iYogiBabu , super talented @TheSunainaa and #karunakaran brother .. all the best to a super successful venture by @studios_sai @DeepakDFT @Music_Siddhu pic.twitter.com/EucPzahZyb

Sunaina while talking about her character said that she liked the way Dennis narrated it. “It felt like wearing a Virtual Reality box where I would experience the forest ambience myself without being in the actual forest” she said to express her emotions. On pairing up with a new hero, Sunaina said that she doesn’t care if the actor is new or well established. Through her statement we could understand that the “Kadhalil Vizhunthen” actress concentrates only on how to give life to the characters she was offered.

She also endorsed Praveen as a potential actor to establish himself as a prominent actor as she witnessed his unique acting skills during the rehearsal times for this movie.

The film is planned to go on floors on 16th September in Talakona forest and it is reported to be completed in a single schedule of 38 days followed by 2 days of shoot in Kodaikanal.

As we said Dennis who worked as assistant Director to Sam Anton in Atharvaa’s 100 making his directorial debut through this movie and Sivappu Manjal Pachai fame Siddhu Kumar to compose music. Camera work to be done by Udhaya Shankar and the film is going to be edited by Deepak.

The film’s plot is all about the two groups who are going for a trip inside a forest for different purposes. Yogi Babu and Karunakaran belongs to one group and the purpose of their journey is a painting job and the other group involves 5 boys and 4 girls. Being a science fiction, the film also lies under the genre Dark comedy and is expected to hit the big screens very soon.