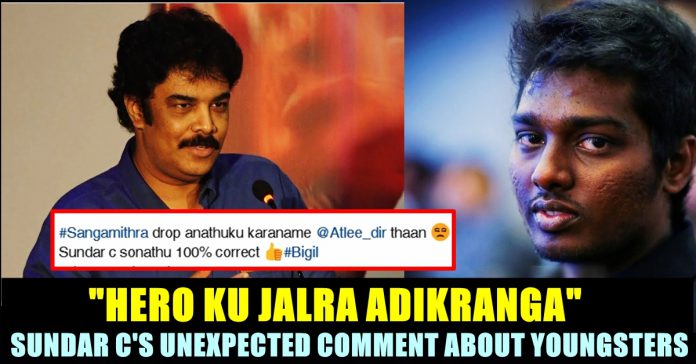 Vishal and Tamannah have joined hands yet again for an action film after Kaththi sandai. Directed by Sundar C, the film titled Action seems to be a thriller, which is unlike the filmmaker’s previous ventures. The film is all set to hit the theatres sometime next month.

The story of Action has its focus on an international issue between two nations. It is quite surprising to see a serious project from Sundar C as most of his films have been full-blown comedy flicks. It looks like Sundar C and team are showcasing another side of their directorial skills with Action.

Now ina recent interview, Sundar C has allegedly slammed young directors for wasting the money of producers. According to few media houses, the filmmaker has reportedly slammed director Atlee for his grand way of making films without necessity. The veteran filmmaker even accused directors for concentrating in making the “Hero” happy instead of concerning about the project.

“New directors who are directing top heroes are highly intended in making the hero happy and they are spending large amount of producer’s money in that process. For choosing them as director, they are showing their gratitude to Heroes by having 2000 junior artists in a scene to show the grandeur.” said Sundar C according to reports.

“To praise the hero through songs and scenes, filmmakers are not concentrating in storytelling which results huge lose to producers. The level of their concern is way higher in satisfying their hero instead making good use of the money spent by the producer” added the filmmaker.

This statement from Sundar C instigated debate in social media as they believe that he is accusing filmmaker Atlee. Initially Sundar C was committed to do a historical film “Sangamithra” under Thenandal films banner. But after producing “Mersal”, Thenandal dropped “Sangamithra” for unknown reasons. This made social media users to think that the “Anbe Sivam” filmmaker is accusing Atlee for his way of making films.

Check out some of the reactions from social media for this statement of Sundar C :

What do you think on this statement of Sundar C ?? Comment your views below !!