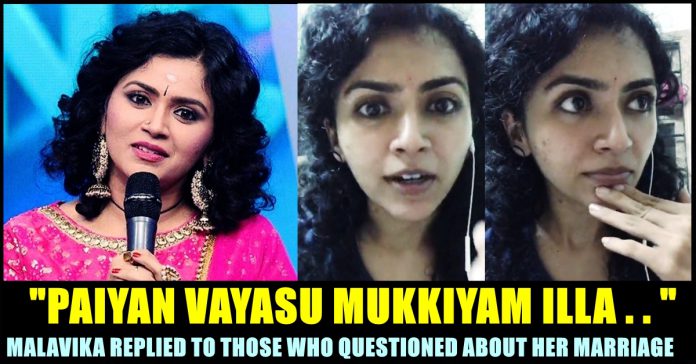 Super singer fame Malavika conducted a chat session with her followers and replied to a number of followers who asked about her marriage that took place recently. While interacting, Malavika revealed that her husband is one year younger than her and replied to a follower who asked how she convinced her parents. She also expressed about her belief on the age difference between a husband and wife couple and answered to a follower who asked her to share about her love story.

Malavika got married to Ashwin Kashyap most recently and has been actively sharing pictures with him in her Instagram space where he enjoys two and half lakh followers. On Friday, she conducted a chat session with her followers and shared about how he first met Kashyap and how their relationship ended up as a marriage.

The singer said that she was talking with Kashyap as friends and opened about how she asked her to go for a date. “I replied to him saying that I am not interested in date and all. I said I want to settle down and asked him whether he would like to marry me. He said that it is not a bad idea and we got married” Malavika said while replying to a fan who asked her to share about her love story.

While answering to another fan who asked “Kash is younger than to Maal or vice versa?”, Malavika said “Yes, Kashyap is younger to me by one year. He is 32” through a video. “My opinion in age in relationships, I don’t think it really matters. I don’t believe that grooms should be elder than the brides. They should have good understanding. They should love each other. Must respect” she said.

When a follower asked how she convinced her parents about marrying a younger guy, she replied saying “I didn’t convince them and all. They were waiting for me to get married for many years. So when I said that I love the guy, they decided to conduct the marriage” Malavika said. Here’s the videos :

After raising to fame through Super singer show, Malavika sung a number of songs in the Kollywood film industry under the composition of prominent music directors such as D. Imman, G.V Prakash, Anirudh etc. She is pretty much active in Instagram and has been sharing about her daily routines, work updates and pictures from her photoshoots through the social media space.