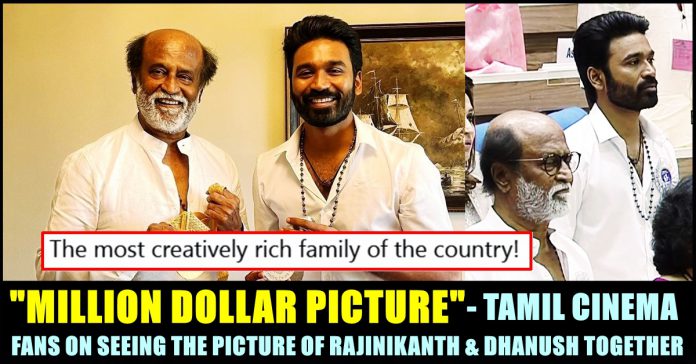 Super star Rajinikanth received the Dadasaheb Phalke Award at the 67th National Film awards and Dhanush, his son-in-law received his national award in the Best Actor category on the same stage. It is notable that it is the first time Dhanush and Rajinikanth received their respective prestigious awards at the same ceremony. A picture of the duo striking pose for a picture together did rounds in the social media platforms with fans congratulating them.

Actor Rajinikanth who is fondly called as “Super star”, “Thalaiva” by fans and predominantly worked in Tamil film industry was honoured with the 2019 Dadasaheb Phalke award. The announcement was made by Information and Broadcasting Minister Prakash Javadekar in the April month of this year. The announcement emerged days before the assembly elections. While questions were raised on the connection with the large fan base of Rajinikanth and the assembly elections, Union Minister Prakash Javadekar responded saying “This is an award related to the film world and Rajinikanth has been working for 50 years…one must ask proper questions,”

From Prime minister Narendra Modi to the actor’s long time friend and Makkal Needhi Maiam president Kamal Haasan, almost all the celebrated personalities from the country wished him the best for the achievement. On Monday, the Superstar actor received the award from vice president Venkaiah Naidu at New Delhi’s Vigyan Bhawan. He dedicated the award to his old bus driver friend, late filmmaker K Balachander who directed his first filom “Apoorva Ragangal”, his brother Sathyanarayana Rao and his “directors, producers, theatre owners, technicians and fans”

For his performance in “Asuran”, Dhanush received the “Best actor award”. He shared the award with Manoj Bajpayee, who won it for “Bhonsle”. Sharing the picture of his medal in his twitter timeline, Dhanush wrote “To my fans” by adding heart emojis.

Sharing a series of pictures of both of them striking a pose together, Aishwarya R Dhanush said “They are mine … and this is history 💜💜#prouddaughter❤️ #proudwife” through her Instagram post.

Check how fans reacted to the picture of Rajinikanth and Dhanush together :

The most creatively rich family of the country!#PicOfTheDay #Rajinikanth #Dhanush #NationalFilmAwards pic.twitter.com/ogV1V49S8Z

This is #Tamilcinema in one frame. Congratulations thalaiva . An inspiration forever you are @dhanushkraja , dreams do come true 😀 @rajinikanth what a beautiful speech. Couldn’t hold back tears watching you receive the #DadasahebPhalkeAward 😍 #Superstar pic.twitter.com/2ZDPXH3DvW