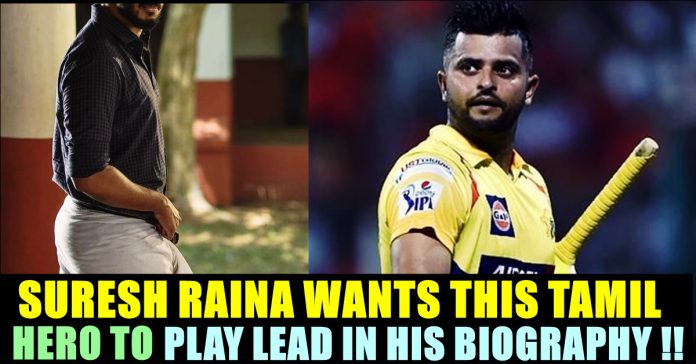 Suresh Raina, one of the prominent players of Chennai Super Kings since the inaugural season of Indian Premier League tournament, opened his opinion on which hero would do great if a biographical movie is made on his life. In the twitter interaction, the cricketer answered to many other questions shot by his fans.

Suresh Raina played for Indian team, a very long time ago. Being a left hand middle order batsman, Raina enjoys a massive fan following in India despite of his absence in the national team. Fondly called as “Chinna Thala” by Tamilnadu fans, Raina represents Chennai Super Kings in Indian Premier League and even captained the team occasionally. Apart from his aggressive batting, Raina is known for his terrific fielding efforts and considered as one of the best fielders in the world till date.

In Bollywood, for past few years, there has been a number of biographical films are releasing and are becoming a massive hits in box office. In the recent Q&A session he conducted with his followers, one of a fan asked “If a movie is made on you which actor would you prefer?Or would you act ur self?”

If a movie is made on you which actor would you prefer?Or would you act ur self?

Ok I think Dulquer Salmaan or Shahid Kapoor .. what do you suggest

Followed by this, the cricketer answered to many questions including his friendship with Tamil actor Suriya. Check out some of his answers below :

He is great actor, and I really admire his simplicity. Met him in chennai

We play at CSK as a family

Determination, positivity, and guidance from my parents helped me to focus & taught me how to fight back strong 💪

First salary that I got from Air India, I bought a handbag for my sister.

The cricketer recently underwent a knee surgery in Amsterdam, the Netherlands which is keeping him out for most of India’s domestic and International matches. The 32-year-old batsman has been going through pain in his knee since the last few months and decided to undergo surgery. The knee surgery was successful and the cricketer started hitting Gym since few days back.

He was expected to represent CSK in this year’s edition of IPL but the tournament got postponed without further notice due to the COVID 19 crisis. Comment your views on these answers made by the left hander !!