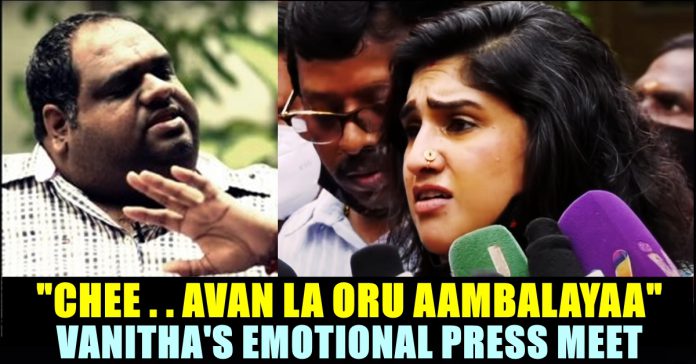 Vanitha Vijayakumar, earlier posted a tweet saying that she is going to meet assistant commissioner of police on Tuesday, regarding a complaint she registered against Suriya Devi, a woman who has been constantly posting videos against Vanitha Vijayakumar and a choice she made. Now, she met the press reporters in the premises of commissioner office and accused Suriya Devi and Producer Ravindran by saying that they both are connected with each other. Vanitha’s lawyer Sridhar also accused Vijay TV fame “Naanjil” Vijayan for having a connection with Suriya Devi in tarnishing Vanitha’s character.

Initially Ravinder called out Vanitha for ruining a family of a woman and two children. In a way of countering his accusations, Vanitha Vijayakumar called him personally and said that she wants to talk with him. Ravinder who refused to talk to her as it was Sunday, gave an interview to media the next day. He has been constantly playing the audio recordings of Vanitha Vijayakumar and answering to them.

Now, in a way of answering to them both, Vanitha and her lawyer insisted police to take immediate action against them. “Initially I ignored her and her videos. But it went too far as she started posting 10 videos per day against me. She even started making ill statements about my lawyer who is doing his job. I got very angry and made a complaint on Suriya Devi and on Ravichander who produced one or two films. He is very much known only for his videos in youtube. He who behaves like my relative or like my opposite party lawyer, went too personal. When I contacted him personally, he didn’t bother about and started behaving rudely and gave many more interviews to media against me” said Vanitha Vijayakumar.

She asked media people to support her and to wait for some things to reveal. ” I am a mother of three children. All these years, I struggled as a single mother. I don’t have family support. For that one reason, many strangers are abusing me for no reason” said Vanitha Vijayakumar.

“They both have connection and they are doing this together. Now they started giving interviews together. “I’m going to reach 40 years now. I decided to have a partner in my life and made a honest decision unlike many who are committing crimes. A small problem occurred and the lawyers will take care of it. It depresses me so much and I am afraid of sending my two female children out.” she said.

Vanitha’s Lawyer Sridhar said that Suriya Devi is currently involved in smuggling business and added that he is going to release audio conversations of herself about the same. “Vijay TV fame Nanjil Vijayan is the mastermind behind all these” he said.

Further Vanitha demanded Producers council to expel Ravinder. She said that she requested assistant commissioner Sampath to take immediate action against Suriya Devi and Ravinder. “He said that they will take action regarding this in 2 days time. Cyber bullying must stop”. the actress said. At one point she who seemed visibly frustrated asked whether Ravindran is even a man. “Is he even a man ?? Is he even a male ?? He is threatening to break my face and calling me as “Akka”. Producers council must expel him. He must not make movies. Who is he to talk about my personal matter ?” she asked.