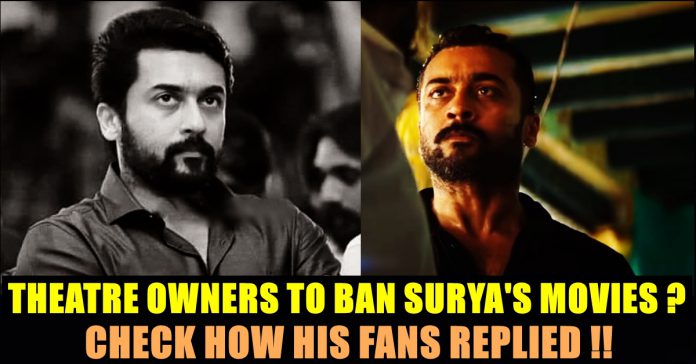 It has been widely believed that Surya’s upcoming film “Ponmagal Vanthaal” is going to get a direct release in online platform. As soon as the news surfaced, The General Secretary of the #TamilNadu Theatre and Multiplex Owners Association, R Panneer Selvam, has announced that their association has decided to not release any film involving actor Suriya or his home production banner 2D Entertainment hereafter.

“After hearing about the news from media portals, we got dejected. Films which are made for theatres should get online release only after releasing in theatres. Suriya, broke the norms and sold his film directly to online medium. We severely condemn this act. If the film “Ponmagal Vanthaal” gets streamed in online platform, we ask them to release all their movies in online platforms. We theatre owner didn’t want any of their film. This is our decision” he said in a video. “When we asked him not to release directly in OTT, he didn’t respond to us” he added.

According to sources, the film Ponmagal Vanthaal, producer by Suriya is going to get released in Amazon Prime, bypassing the traditional theatrical release. The film is expected to stream on the platform during the first week of May, if the makers decides to go on with the decision. However, no official statement from Suriya has been made yet. It is notable that Suriya’s most expected film of 2020, “Soorarai Pottru” is also produced by his home banner which likely to get in trouble due to this controversy.

Meanwhile, on seeing the troubles faced by their favourite actor, fans of actor Suriya trended a hashtag “Anbulla Suriya” in the micro blogging social media site to extend their support. The hashtag is currently trending with more than 3 lakh tweets with various kind of reactions.

Check out some of their tweets below :

Being one of the most humble stars of Tamil film industry, Suriya Sivakumar is currently busy in signing movies with high profile directors. The actor who was last seen in K.V Anand’s “Kaappaan”, is currently working on Sudha Kongara’s “Soorarai Pottru”. Recently it was reported that Surya will be joining hands with acclaimed director Vetri Maaran.

As far as his production venture is concerned, the actor has produced films like Uriyadi 2, Kadaikutty Singam, 24 etc. However, we have to wait and see if “Ponmagal Vandhaal” is going to get an OTT release !!