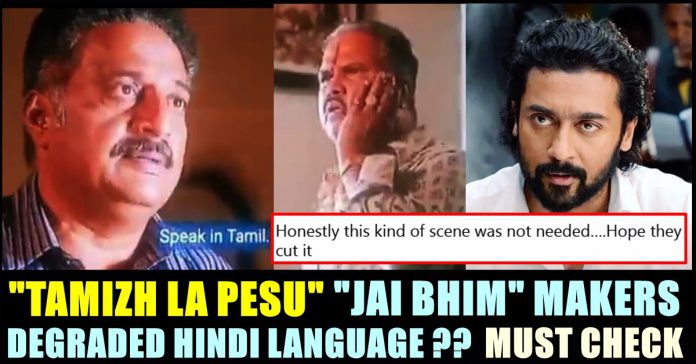 A particular video from “Jai Bhim” of Suriya-Jyothika is doing rounds in social media platforms with many Hindi speaking individuals getting offended over it. The video shows actor Prakash slapping a man who speaks Hindi and asks him to talk in Tamil. Misunderstanding the context of the scene without watching the movie, a number of Twitter users who belong to the north part of the country has been posting tweets, expressing their displeasure.

In “Jai Bhim”, Prakash Raj plays the role of a honest police officer who helps a tribal woman to get justice in high court. In the process, he investigates a number of culprits including police officers and a pawn broker. While interrogating the pawn broker who pretends to be knowing only Hindi language, Prakash Raj would slap him and ask him to talk in Tamil to make him confess.

Misunderstanding the scene, a number of Twitter users could be seen slamming “Jai Bhim” makers, alleging that they kept such scene to degrade the Hindi language. “Prakash Raj with his propaganda in the movie ‘Jay Bhim’ where he slaps a person who speaks in Hindi” a twitter user wrote whereas nother one said “I am really heartbroken after watching #JaiBhim, nothing against actor or anyone but felt really bad, there is a scene in the film where a person speaks Hindi and Prakash Raj slaps him and tells him to speak in Tamil. Honestly this kind of scene was not needed…. Hope they cut it”

Prakash Raj with his propaganda in the movie ‘Jay Bhim’ where he slaps a person who speaks in Hindi. pic.twitter.com/1SwPVssbK7

Prakash Raj character slaps a man for speaking in Hindi and not Tamil.#JaiBhim pic.twitter.com/25uWoIbFXQ

I am really heartbroken after watching #JaiBhim, nothing against actor or anyone but felt really bad, there is a scene in the film where a person speaks Hindi and Prakash Raj slaps him and tells him to speak in Tamil

Honestly this kind of scene was not needed….Hope they cut it

Insults Hindi language in the movie

But wants to make money by releasing the movie in Hindi

In Tamil Version of Jai Bhim, Actor Prakash Raj slaps a person who spokes in Hindi and asked to speak in Tamil. But the producer of the Film @Suriya_offl released the movie in Hindi Version.. If you don’t like Hindi why you need to release the movie in Hindi??

However, according to the film, the person who gets slapped by Prakash Raj knows Tamil language well and is shown speaking it fluently in the previous scenes. Finding out he pretends to be new to Tamil nadu, Prakash Raj, as a Police officer, would slap him to make him confess the truth. Many Internet users who watched the film could be seen stating the same while replying to those who got offended.

Also, it’s clearly shown in the movie that, the person can understand Tamil very well. So, in this scene, as Prakash Raj was investigating, he should have spoken either in Tamil or in English. But he spoke in Hindi. Also Prakash knows that he’s lying and hence he slapped him.

Thank you – We need this unwanted controversy so that the movie can reach More people. #Jaibhim https://t.co/fJAgxxsKHH

1. Pawn broker is in TN doing business, Prakash Raj is a police officer in TN and questions him in tamil. Pawn broker knows tamil but chooses to answer in Hindi.

He uses Hindi to obfuscate the truth about his involvement in a crime. He collaborates with Tamil criminals. This has nothing to do with being slapped for speaking in Hindi. https://t.co/vp5zPNAuGU