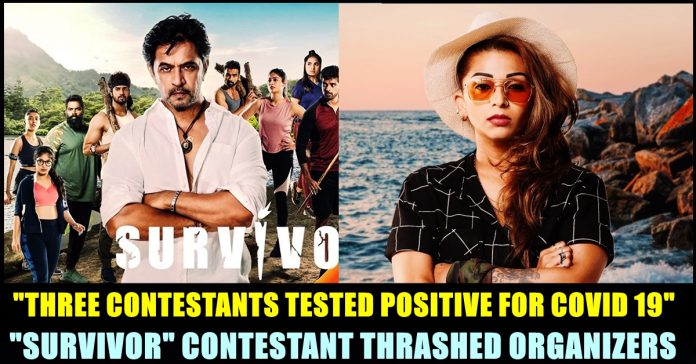 Kalaivani who is popularly known as Lady Kash came up with a statement expressing her dejection over the organizers of the show for inflicting injustice to her. She revealed about three contestants of the show suffering with COVID 19 virus and said that the show management denied to provide her rest who is suffering with all the symptoms of COVID 19 virus. Due to her test result which showed negative, the show organizers refused to give her time to recover and asked her to leave the show if she wants to take rest. Raising her voice, Lady Kash released a video and sought support from the public.

The show is all about having the contestants stranded in an isolated place. They are expected to perform highly risky tasks which they will have to win in order to gain food, water and other essentials to survive in the island. Initially, the contestants were asked to perform tasks in group and the individual tasks were conducted as well. Now, a video released by Lady Kasha, one of the contestants has created huge controversy about the show. Along with the video, she also issued a long not explaining what really happened.

Despite of contestants suffered illness for more than a week, COVID test took place only after Arjun’s request, said the contestant through her press note. “Even though my test result showed negative, I had all the symptoms of Covid such as chest tightness, cough, cold shivers, body aches and fatigue. I was barely able to stand. It was clear that I was unwell, notwithstanding the negative Covid test result. We were placed in an accommodation on the 24th and were allowed to speak to our families only on the 3rd day, after much begging and pleading, all while we were worried for our lives and health” Lady Kasha said through her post.

She further said that the contestants who were tested positive for COVID 19 virus, were allowed to take test and to take part in the show after testing negative. However, Lady Kash who is suffering with all the symptoms of COVID 19 was not allowed to take rest and continue in the game as she tested negative. “My Manager and I had requested the organisers for the same opportunity for me: to rest, recover and get back in the game when I am once again well enough to play. This request was downright denied by the organisers on the grounds that I had not tested positive for Covid and instead, only had all the symptoms. They clearly did not consider this as anything serious and the organisers told me that I had to either immediately get back in the game or leave the game. Basically, I was given the ultimatum of choosing between the game and my poor health.” she further said in her post and accused the show organizers of being money minded.

“The single worry of the organisers was money; to finish the remaining 20 episodes within schedule in a lesser time frame, regardless of health concerns.” Kalaivani said in her post and wanted people to support her by sending her mail with the subject “Reality Injustice”