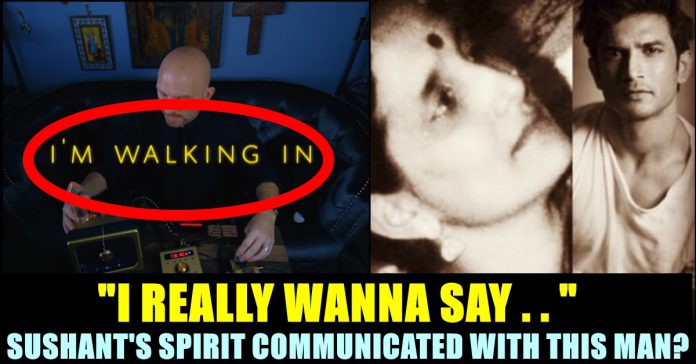 While fans are still trying to cope up with the loss of young actor Sushant Singh Rajput, a man named as Steve Huff who runs a youtube channel named as Huff Paranormal has claimed that Sushant Singh Rajput’s spirit communicated with him. The paranormal expert who is known for communicating with the spirits of deceased, has invented equipments to help himself for such unusual work. He is currently boasting 1.12 million subscribers for his youtube channel and allegedly interacted with the spirits of popular personalities such as Michael Jackson, Kobe Bryant and more.

Upon the several requests he received from the fans of Sushant Singh Rajput, Huff decided to make a video on his youtube channel interacting with the Bollywood star. They were demanding through emails and messages to speak with the actor’s soul. On July 14, Huff uploaded the video of his session with Sushant in his youtube channel and it already reached 9 lakh plus views.

Initially Huff says that he is not aware of the works done by Sushant but adds that he is well loved by his fans. He asks Sushant to speak with his fans, family or whomsoever he wants alleging that he has given him the voice through the box he made. “So if you have a message Sushant, feel free to come through” says Huff to received a reply saying “THERE RIGHT NOW”

Huff confirms that the communication he is making with Sushant is real and says that he is doing it for 10 years with his own invented device to do it effectively. “This is what I do, This is my life. So any of you stumbled upon this wondering it its real, yes, it is real” he says in the video. Throughout the video we could hear the alleged voice of Sushant Singh Rajput communicating with Huff with disconnected sentences.

“THERE IS A LIGHT HUFF” is the first thing we hear from the unrecognisable voice. “TELL STEVE I’M GETTING THE LIGHT”, “HUFF THEIR LIGHTS HAVE GONE LOW”, “THEY BEEN WATCHING YOU” are the some of the sentences we hear from the voice.

“I’D REALLY LIKE TO MEET GOD” the voice can be heard saying. When Huff says that lot of his fans wanted him to do this, the voice says “DO YOU KNOW WHAT, I REALLY WANNA SAY TO THEM”. When Huff asks why Sushant took his own life, the voice says “THE CHANGE”. Huff, then, asks whether there are two spirits. At the end of the video, a woman’s voice says “IT’S ENDING” after hearing which Huff says that Sushant is accompanied by someone throughout the session.

A day ago, Huff said that he will be recording a follow up this weekend. “.and if I can connect again I hope to have this up in 2-4 days. Love you all; have an amazing weekend.” he said.

Many people believed this video and started decoding it. Some of them alleged that the laugh sounds exactly like Sushant and asked Huff to do more sessions with Sushant in order to find the real cause of his death.

Sushant Singh Rajput died on 14th of June and is declared by the police officials that he was died of suicide. The 34 year old actor left the entire country in utter shock as he a had a brightest future in the Bollywood industry. Many fans blamed the existence of Nepotism in the Bollywood town for the demise of actor as well.