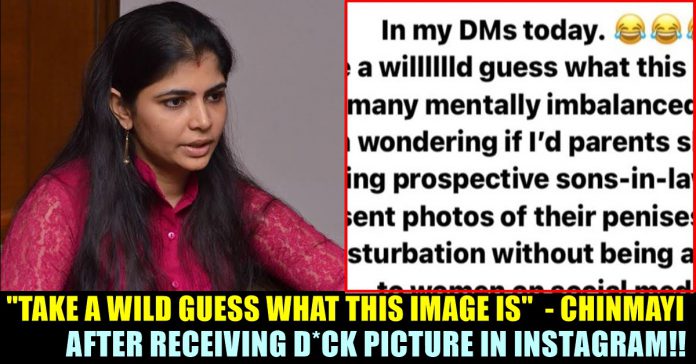 Instagram is a wonderful platform to connect with people around the world. It is a great feast for the inquisitive people. It paves the way for many people to showcase their talents and helps them to get recognized. Many influencers use Instagram to educate people on various areas. However, Instagram is not without its cons. People sending inappropriate texts and making disgustful comments are so common on Instagram. At times these people go a step ahead and send obscene texts and images to others. Most of the public accounts become a victim to these kinds of texts and comments.

Singer cum activist Chinmayi Sripaada, is known for her open and outright statements on many matters. She also voices out against the issues faced by women. In her Instagram account, she invests her efforts to break the stereotypes and is against misogyny. She also educates women on various things. Most of her posts are often flooded with disgusting comments from strangers and messages she receives in her inbox would contain obscenity are often exposed by herself. However, she is one of those bold people who expose the vulgar texts she receives. She has never let the perverts get away easily. She has always brought bizarre texts to the attention of the people. She also gives these weirdos knocking replies.

In her Instagram story, Chinmayi has exposed one such filthy image that was sent to her. She has posted a screenshot of the image she has received in her story. She has asked her followers to guess what she has got in her direct message. She addressed these men as ‘mentally imbalanced males’. She has also added, “I am wondering if I’d parents should be asking prospective sons-in-law if they have sent photos of their penises or videos of masturbation without being asked for it to women on social media.” She mocks if sending penis pictures to uninterested has become an expectation of the bride’s parents. However, she has not mentioned the user’s ID in this story.

The singer who has been expressing her frustration over a hashtag that trended recently saying “Not All Men”, sarcastically added “Not All Men” hashtag in the recent Instagram story as well. She replies to most of these offensive texts in a dashing way. She also supports many campaigns that help in the upliftment of women and their livelihood.

Nowadays, so many people have started to expose the dirty comments, texts, and images they receive. They also motivate others to voice out these issues and never to shut their mouths. Influencers also spread awareness among people on how to face these matters.