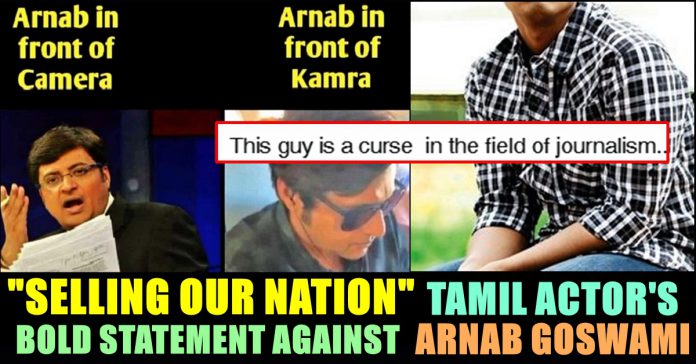 Arnab Goswami recently grabbed the headlines for getting harassed by a stand up comedian, Kunal Kamra on flight. Arnab is known for supporting the BJP party for its ruling and for ignoring the party’s flaws. Kunal Kamra is known for severely criticizing the current government in a frequent manner for its failings.

People with two completely different ideologies happened to share a same flight. Kunal has recorded a video demanding Arnab Goswami to answer to his questions in a way he hosts his debate shows in his Republic TV. In the entire video, Arnab Goswami was seen wearing earphones plugged in, most probably watching something in his cell phone. Though Kunal can be heard talking to Arnab repeatedly, he doesn’t replied and avoided looking at the camera even for a second.

I did this for my hero…
I did it for Rohit pic.twitter.com/aMSdiTanHo

Now in a way of reacting to this incident, actor Siddharth who is vocal about the social issues has posted a tweet in his official social media account. He who seems to be very angry and frustrated with the fact about not being able to have a normal conversation with Arnab Goswami in public. He even accused the journalist for selling the country India. He asked his 44 lakh followers to reply with their opinions on Arnab Goswami.

The tweet of the “Ayutha Ezhuthu” actor read “The only way to acknowledge #ArnabGoswami is on his show. Where he lies, & sells our country while insulting you. Since you can’t speak to him in public without the govt. protecting their lap dog… Let us use #Twitter. Reply with why you have had enough of this dangerous pest.”

The only way to acknowledge #ArnabGoswami is on his show. Where he lies, & sells our country while insulting you. Since you can't speak to him in public without the govt. protecting their lap dog… Let us use #Twitter. Reply with why you have had enough of this dangerous pest.

His followers expressed their opinions as well. Check out some of them below :

Arnab Goswami is a typical example of how not to be a journalist.

Arnab Goswami will go down in the television history as one of the most divisive, biased and sold-out journalist peddling Black lies.

This guy is a curse in the field of journalism.. The audacity to say that the protesters used guns in the day time news and then say they are provoking the others at night on his so called #Debate.. Man this guy is a terrorist in the media protected by his masters..

There is a limit to even low lying journalism.He manages to surpass that as well. What a shame on Us that we let a channel like this run.
The cat is now out of the bag. There is no more hiding. This man with no conscience! #shameonrepublictv #shameonarnabgiswami #ArnabIsACoward