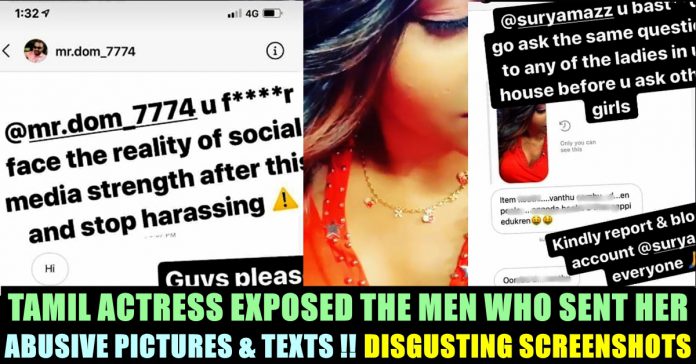 Shalu Shamu who was in limelight weeks ago for revealing about a director of Vijay Devarakonda movie who approached her to sleep with him, has now exposed these random Instagram using men for their abusive manner.

People in social media platforms such as Instagram, Twitter and Facebook often thinks that the things they are sharing in a private inbox of someone else is going to stay private forever. But they must realize that it would become public sooner than they think and would spread faster than they assume.

In this internet era we could hardly see a person who is not having social media account. The number of people who are using social media platforms to interact with unknown girls are way higher than the people who uses it to interact with their closed groups. In this case, Actress Shalu Shamu boldly exposed such men through her Instagram account which has more than 80,000 followers.

In her first Story, she warned the men to unsend the abusive texts. She also said that it will be posted by tagging names if not deleted till 12. Check out the story here :

The second story, regarding this issue, posted by Shalu Shamu 9 hours later in which she appreciated those who unsent their abusive texts. She also said that many of them unfollowed her as well. But two of them failed in following what Shalu warned about.

The next few stories are horrific to see as it contained obscene blurred picture of a man who sent “HI” before sending the image. The screenshot was shared by Shalu with a caption saying “u f****r face the reality of social media strength after this and stop harassing”

She also asked her followers to report and block the person. Check out the screenshot here :

She added another post in which another male user abused her with extreme bad words for no appropriate reason. She gave him back by adding a caption which said “u bast**d go ask the same question to any of the ladies in your house before you ask other girls”

Followed by these stories, Shalu Shamu also exposed the guys with their pictures and with their Instagram ids. Check out the screenshots of those stories here :

Shalu Shamu, a young supporting actress in Tamil cinema has earlier revealed that she has been approached by a director to sleep with him to get a role in his upcoming movie with Vijay Devarakonda. Shalu Shamu who has a huge fan following in social media platforms such as Instagram and Twitter has revealed it through her Instagram story while answering to one of her follower.

For the uninitiated, Shalu Shamu is an actress who has appeared in Varutha Padatha Vaalibar Sangam movie as heroine’s friend and was last seen in Mr.Local in a small role. In one of her recent interviews, the actress expressed her wish to feature in Bigg Boss show.

It is high time for these kind of men to realize what they are actually typing and uploading in a random girl’s inbox. Comment you views on this disgusting behaviour of those Men !!