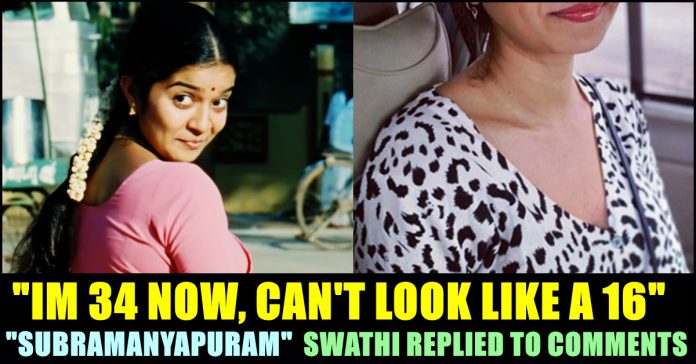 Swathi reddy rose to fame among through her debut film “Subramaniyapuram”. Her cute looks and adorable expressions with that half saree in “Kangal Irandal” song is still a favourite for many of the Tamil cinema audience. Unlike other debut heroines of Tamil cinema, Swathi had weightage for her character in her debut film itself. The film gained fame for the actress who worked as a Television presenter in the Telugu colors channel before her acting stint.

She ventured into television at age 17 by hosting a show called Colors. Due to a positive response, the show was further extended and moved to the primetime slot. She went on to present over 150 episodes. After her successful acting career, Swathi married her boyfriend Vikas Vasu, a Malayali pilot, on 30 August 2018.

Swathi is one of the many actresses who are very much active in social media platforms, especially in the photo posting app Instagram. The actress who is enjoying nearly seven lakh followers, recently uploaded a post in a way of explaining her followers how good growing older is. Posting a couple of pictures of herself, Swathi said that she couldn’t look like a 16 year old colors Swathi anymore as she is 34 years old now.

The actress said that she needs to accept who she is at the age of 34. “I am human” she wrote in her post. To all those people who are commenting on her looks, Swathi said that it is a privilege to grow old. “it means am still alive. I can’t look like like the 16 year old colours host anymore. Am genuine loving growing older. It’s tricky but it’s more liberating.” she wrote in her Insta post.

I wasn’t ready for the first candid picture, and she wasn’t ready for the second one. Got even with her. No mysterious message here. No moralistic gyaan. No photoshop. Just some timepass. Sankranti kada.. eating, buming, wasting time online and most importantly keeping it real with you guys. Edited : My peers don’t adore my straight forward nature but at 34 I need to accept who I am. And your support helps. Am human. All those people commenting on me looking old, broken, tired etc honestly it’s a privilege to grow old, it means am still alive. I can’t look like like the 16 year old colours host anymore. Am genuine loving growing older. It’s tricky but it’s more liberating.

Yesterday actress Shruti Haasan uploaded a similar post, addressing the people who commented on her looks and body. (Also Read : Shruti Haasan’s Bold Reply To Those Who Commented On Her Physique !!) Cinema Celebrities, especially female celebrities across the world are facing this problem whenever they upload a post on their respective social media accounts. It is high time for those commenters to realize that there better things to do with the life provided by god.