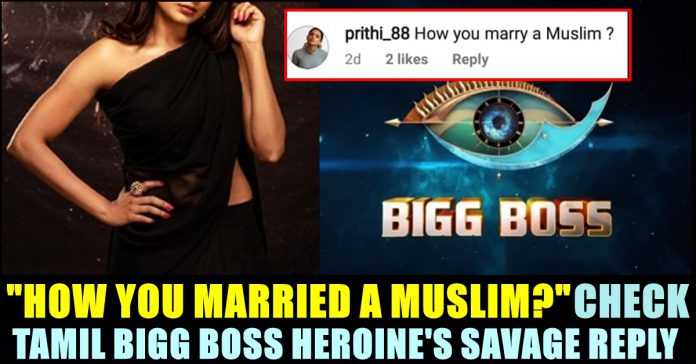 All the three season of Bigg Boss Tamil show brought the participants of it in limelight. The show which was hosted by Ulaganayagan Kamal Haasan is one of the highest viewed program as it attracted the family audience in big time. After life of the contestants of Bigg Boss Tamil season 3 are very much visible as they are super active in social media platforms such as Twitter and Instagram. Now, one of a wild card entrant of the second season of Bigg Boss, actress Vijayalakshmi was forced by one of her follower to state the reason behind her marriage.

Vijayalakshmi, the actress who got introduced to tamil film industry through Chennai 28 in which played the role of a love interest of Mirchi Shiva. She also played the female lead in Mysskin’s cop thriller “Anjathe”. Vijayalakshmi Feroz walked out of Nayagi serial to enter the Bigg Boss Tamil 2 house as a wild-card entrant.

In one of her recent post, Vijayalakshmi uploaded a picture of herself with her husband in a traditional attire. After her Bigg Boss stint, the actress became very active in social media platforms, especially in Instagram. Vijayalakshmi married her former school mate, Feroz Mohammed, in September 2015. Feroz later became a film director through Pandigai, while the pair had a son in May 2017 and named him as Nilan.

In the post she shared Vijayalakshmi added a caption saying “Super fun shoot with hubby! Thanks for doing this for me mamoiii”

As every cinema personality do, Vijayalakshmi also happened to face few strangest comments for her post. One of the most weirdest comment came from a girl who asked how Vijayalakshmi married a muslim man. “How you marry a Muslim ?” she asked in her comment.

Vijayalakshmi who is known for her straightforward attitude in the Bigg Boss house, made a hilarious comment to troll the user who shot such question. The actress wrote “there’s a you tube video dear. I followed the instructions.” For this comment, Vijayalakshmi’s husband Feroz replied with a laughing tears emoji.

Vijayalakshmi seems to have received the same question from several number of people. She captured the screenshot of her reply and posted it as her Instagram story. “Those who wanted to know” she wrote in her story.

Her reply lauded by many of her other followers. Well, that’s one way to stop receiving such questions, ain’t it ?? On the work front, Vijayalakshmi is working in a movie called as “Kasada Thapara” which is expected to be released under Venkat Prabhu’s Black Ticket Company. She was last seen in the “Mankatha” director’s Chennai 28-2. Comment your views on this reply of Vijayalakshmi !!