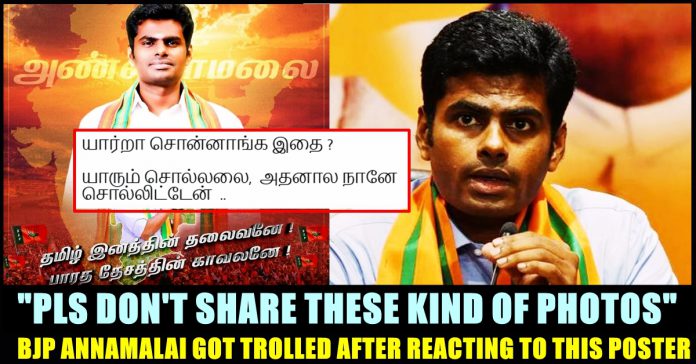 Reacting to a poster made by his followers, Tamil nadu BJP leader K. Annamalai requested his followers not to circulate such photos and advised that there is no place for hero worship in a party like BJP. He also said that he is working towards taking the ideology of honourable Prime minister Narendra Modi forward like every other followers of the party and identified himself as a small part. The poster was made as a celebration for the 1st year anniversary of Annamalai in Politics. It termed Annamalai as the leader of Tamil community and a Guard of country India.

Weeks ago, 37 year old Former Indian Police Service (IPS) officer K Annamalai, was appointed as the new BJP chief of Tamil Nadu, succeeding L Murugan who was inducted into the Union cabinet. Annamalai was Deputy Commissioner of Police (Bengaluru South) in 2019 when the 2011 batch IPS quit the civil services. By then, he was already known as Karnataka’s ‘Singham’, a term that is used to mention a tough cop. K Annamalai had hit the headlines for his role in tackling the 2017 riots in Karnataka’s Chikmagalur and there were protests in the district when he was eventually transferred out.

The BJP party hopes that the 37-year-old will draw in more youngsters ahead of the local body elections slated later in the year. Since 2019, he is the third leader to take charge of the BJP’s top post in Tamil Nadu. On Sunday, the politician came up with a poster which heaped praise on him and requested his followers not to make such designs in the future.

“Request you all to desist circulating photos of this kind. We are a party with a difference & all of us are taking a noble ideology & our Hon PM Shri @narendramodi ji’s vision forward. There is no place for hero workship & like millions of you, I’m also playing a small part in that” said Annamalai by uploading the picture. Check out his tweet below :

Request you all to desist circulating photos of this kind
We are a party with a difference & all of us are taking a noble ideology & our Hon PM Shri @narendramodi ji’s vision forward
There is no place for hero workship & like millions of you, I’m also playing a small part in that pic.twitter.com/6ZHP2A4v4r

The post of Annamalai garnered wide reach with many trolling the BJP leader for making a spelling error while typing “Worship”. Few even said that they never saw the poster anywhere before and came to know about it only through the tweet of Annamalai himself. Check out some of the reactions surfaced for the tweet below :

Raise your hands if you haven’t seen this at all except for this tweet 🤷🏾‍♀️ https://t.co/yRSW62Q0cQ

Party with a difference..

“Yes. It needs a Visaka Committee… Party President colludes with a third rates sex scandalist and settles vengeance with the same party leaders”

We dont get to see this in normal parties.. only with party with difference. https://t.co/1ccmuAbx84

BJP leaders everyday showing how lame they can get.

Nobody has seen this tacky poster before except in this tweet.