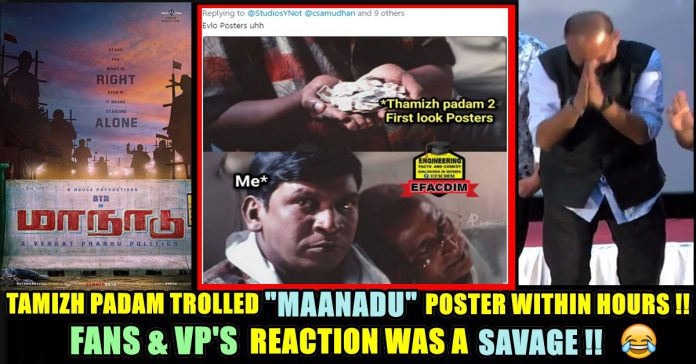 Sources said earlier that STR and Venkat Prabhu are in talks to do a film for producer Suresh Kamatchi. Recently, all the three met in Chennai and discussed for a possible collaboration this year. Venkat Prabhu had long back tweeted that he would like to make Billa 3 with STR and Yuvan Shankar Raja combo so we the fans expected this new film is going to be the third installment of Billa. STR has just completed the shoot of Mani Ratnam’s Chekka Chivantha Vaanam and he will soon start dubbing for his portions in the multi-starrer. STR is also in talks with Gautham Vasudev Menon for the VTV sequel which is expected to go on floors by the end of this year.

Today Morning Venkat Prabhu officially announced the title of the film in which he is going to collaborate with Simbu in his twitter account. He also confirmed that the producer is Suresh Kamatchi. Venkat Prabhu received an over-whelming response from the Simbu fans for this announcement. He also confirmed that it is a fresh script which denotes that it is not going to be the sequel of Billa earlier. Check out the title announcement below :

Hours after this announcement C.s Amuthan the director of most awaited parody franchise of Kollywood “Tamizh Padam ”  whodirectly asked for the first look to troll when Venkat Prabhu made the official announcement of the film. He also whole heartedly congratulated Venkat Prabhu. He proved that he does not asked for name sake by making a design exactly like the title release of Venkat Prabhu.

Check out Tamizh Padam 2’s version of “Manadu’ poster which was released by Y not studios here :

To this hilarious poster Venkat Prabhu does not missed to reply. He took it very lightly unlike others and greeted them with a laugh. Check out his tweet here :

For this the Tamizh padam crew recieved an over whelming response from the fans. Check out some of the main : Whats your opinion on this weird crew that Kollywood never faced ??