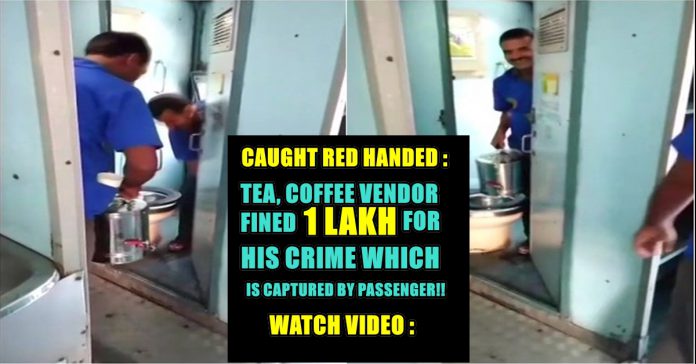 The Railways slapped a vending contractor with a fine of Rs 1 lakh after a video, which went viral. After probing the incident, SCR officials verified the origin of the video. The officials said that the incident occurred in Train no. 12759, Chennai Central to Hyderabad (Charminar Express), at Secunderabad railway station in 2017. Railways department identified the contractor of the vendor as P Sivaprasad, who operates between the section of Secunderabad and Kazipet, and imposed a fine of Rs 1 lakh. After outrage on social media over the viral video of a tea vendor using tap water from the toilet for making tea, South Central Railway has slapped the vending contractor with a fine of Rs 1 lakh on Tuesday. The incident had occurred in December last year onboard Chennai Central-Hyderabad Charminar Express at Secunderabad railway station in Hyderabad.

“An inquiry has been held to identify the wrong doers and initiate appropriate action. On the basis of the Inquiry, stringent action has been taken up against the Train Side Vending contractor for the section between Secunderabad and Kazipet, P Sivaprasad, with whom the identified vendor in the video was employed. A penalty of Rs.1 lakh has been levied on the licensee, through IRCTC, the contracting agency.” said SCR Chief Public Relations Officer M Umashankar Kumar in the release. In the video, a vendor is seen passing three cans of tea from the toilet from a stationed train to his colleagues, suggesting that he had filled the tea can with tap water.

The man who has been filmed the entire act, confronts the tea vendor. However, they remain evasive, avoid confrontation and walk away from the spot. This video surfaced on the internet recently and has been doing rounds across social media. Disgusted by the video, several netizens slammed the railways for being negligent and offering poor services.

As the pressure kept mounting, the railways department has initiated a probe and identified the contractor, and said that it will maintain a strict vigil on the vendors so that such incidents don’t reoccur in the future.