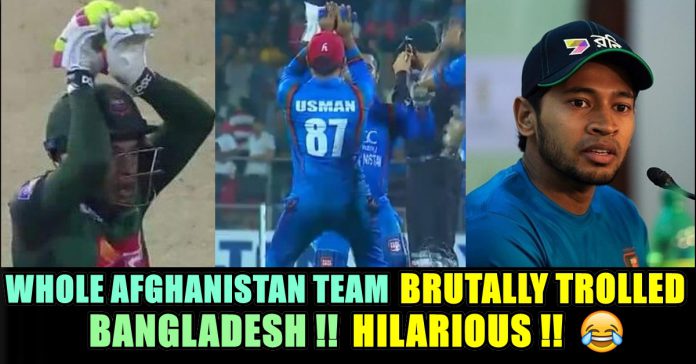 Afghanistan leg spinner Rashid Khan added another feather to his cap, bowling his team to a sensational one-run win over Bangladesh in their final T20 game to seal the series 3-0 at the Rajiv Gandhi International Stadium on Thursday.

Bangladesh, chasing Afghanistan 145/6, needed nine runs to win when Rashid Khan came on to bowl the last over. He struck first ball and then a run out off the final delivery left Bangladesh one run short. Needing four runs to win on the last ball, Ariful Haque hit towards long-on but an outstanding effort by Shafiqullah denied the boundary and Mahmudullah was run out going for a third run, which would have tied the game. He made 45 balls off 38 balls.

Mahmudullah and Mushfiqur Rahim batted with guts to take Bangladesh close to the target. Mushfiqur scored a 37-ball 46 runs. After the win, an ecstatic Afghanistan exulted in joy, poking fun at the Bangladesh team’s signature dance moves of “Naagin” dance. Braving the criticism doled out by Bangladesh Cricket Board president Nazmul Hassan in the middle of the series, the Shakib Al Hasan-led Bangladesh team fought-back in the match but could not convert it into a win. Afghanistan will now travel to Bangalore for the historic first Test against India starting June 14.

Mohammed Shahzad and Usman Ghani entertained the spectators with some clean hitting. The duo gave a solid start and stitched a 55-run opening partnership. Shahzad blazed away to a 22-ball 26. Abu Jayed sent Ghani packing for 19 runs. Captain Asghar Stanikzai and in-form Samiullah Shenwari put Afghanistan back on track. Asghar hit three sixes in his 17-ball 27. Trying to swing across the line, Asghar ended up skying a catch to substitute fielder Sabbir on Ariful Haque’s delivery.

Using his experience of playing in the Bangladesh Premier League for Rangpur City, 30-year-old Samiullah Shenwari showed his mettle and collected runs for Afghanistan at crucial junctures. Carrying forward from previous game’s form, Samiullah anchored the Afghanistan innings with an unbeaten 33. Batting at No 6, Najibullah Zadran made 15 runs. Here’s the winning moment of Afghanistan :

What do you think on Afghanistan’s performance ?