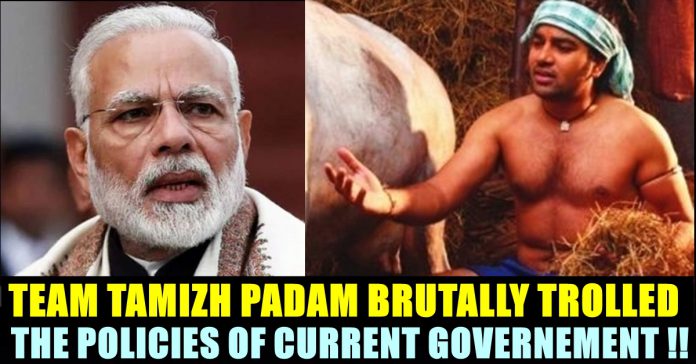 To celebrate the 10 years anniversary, The only parody film of Tamil film industry has took a sly dig at the political issues that is taking place in country India right now. Right from Superstar Rajinikanth to Little Superstar Simbu, the makers of Tamizh Padam 1 & 2 did not spare any hero of Tamil film industry. In the only Tamil spoof film, there are references of many Tamil films right from Shankar’s Kadhalan, Boys to Vijay Sethupathi’s Vikram Vedha, Ajith’s Vivegam and Mankatha, Vijay’s Mersal ,Thuppaki and Rajinikanth’s Kabali etc. Now the film crew went one step ahead and trolled the political agenda of the ruling party in their own style.

The film marks the debut production of Y not Studios who are also celebrating the 10 years function since their inaugural. Yesterday, C.S Amudhan, director of the film posted a tweet tagging Sash Kanth, the CEO of Y not studios. “Dear Sashikanth & Y not studios I have not yet received the poster to be published tomorrow. I hope you don’t do anything controversial, I don’t want any negative feedback.” read the tweet of the filmmaker to which he received a reply from Sashi saying “Yennada!!! …. you know us right 🤷🏻‍♂️…. rest assured …. nothing controversial …. sleep well . Goodnight 🙏🏼 “

However the posted they released to celebrate the 10 years anniversary of Tamizh Padam is indeed controversial. It contained a hidden message of saying no to the recent laws created by the ruling government which is instigating protests all over the country.

Check out the poster here :

The highlighted letters in the poster CAA, NPR and NRC stands for Citizenship Amendment Bill, National Population Register, National Register of Citizens respectively. However according to the post of the makers of Tamizh Padam are alleging that NRC stands for Nadigar Sangam Related controversies, CAA stands for Cutout Atrocities by Agila Ulaga Superstar and NPR stands for Nonsensical problems during Release.

One more thing attracted the audience is the punchline “Azaadi from Cliches” and we can see the makers saying that they are doing a service for the nation. Followed by this post, C.S Amudhan even compared his film with an iconic science fiction movie “Shutter Island” directed by Martin Scorsese as it was released in the year 2010 as same as his film.

Looks like the 10th year anniversary of many Epic films are approaching. https://t.co/TY6aygY4yb

C.s Amuthan, the maker of the only Kollywood parody film franchise is a very active person on Twitter. He also seems to have very strong connection with the fans as we can hardly see a negative comment for his tweets. The reason is nothing but his only film Tamizh padam which earned him a lot of followers and they also believes him to repeat the history again with Tamizh Padam 3.