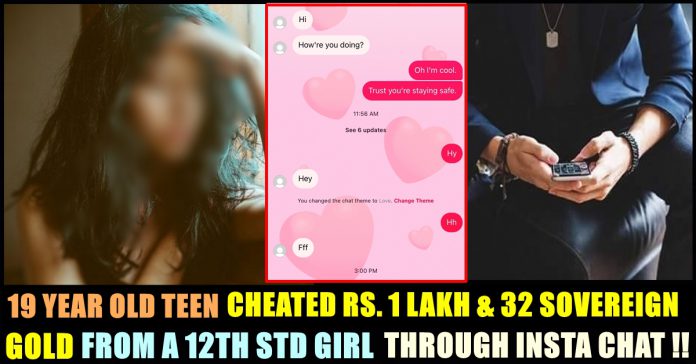 A report on a 19 year old teen boy cheating a sum of huge amount of money and gold from a 12th standard girl sent shockwaves among the public. It has been reported that the boy, after gaining the friendship of the victim through Instagram, cheated her. As soon as knowing about the belongings missing, parents of the girl came to know about the accused and registered a police complaint. Search to nab the teen named Revanth is on, said reports.

16 year old Swathi (name changed) lives in Vishnuvakkam which is located next to Vengal in Thiruvallur district. She is currently studying 12th standard in a school that is located in the same district. Due to COVID 19 spread, Swathi was attending online classes through a smart phone which was bought by her father for her last year.

Apart from listening to classes, Swathi also started using the smart phone to chat and browse. She who became active in social media platforms such as Facebook and Instagram, started chatting with a stranger named Revanth. He who lives in the Manavala Nagar area of the same district, exchanged number with the school student and started talking with her through phone calls. He who got introduced to Swathi through Instagram, started contacting her directly through phone calls.

Swathi believed Revanth completely and treated him as her best friend as behaved good to her. After gaining her trust, Revanth started playing his evil games with her. In the pretext of curing his mother who is ill, Revanth initially bought amounts such as Rs. 500 and Rs. 1000 from her as debt. After seeing Swathi giving him the money by meeting him in person, hours after asking, Revanth concluded that Swathi belongs to a wealthy family.

The 19 year old promised Swathi of marrying her in the future after knowing about her family background. Saying that he has debt problems and he suffers from financial issues, Revanth bought jewels and money from the victim. Swathi’s parents failed to keep an eye on their belongings as they had belief in their daughter. However, Swathi emptied the berow locker by giving all the money and belongings to Revanth.

When the school student’s parents found their belongings missing, they threatened the girl and questioned about it after which she accepted about giving everything to Revanth. Shocked to have lost 32 sovereigns of gold and Rs. 1 Lakh of cash, Swathi’s parents registered a Police complaint in Vengal station. Search to nab the accused is currently underway, according to report.