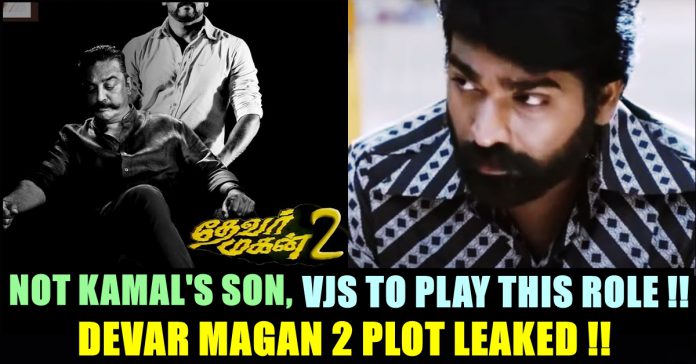 Vijay Sethupathi’s role in Kamal Haasan’s upcoming political drama “Thalaivan Irukkindran” revealed. The film which is an official sequel of 1992 blockbuster film “Devar Magan” is going on floors as soon as the lockdown gets lifted in southern districts of Tamilnadu. As Devar Magan talked against casteism in rural parts of Tamilnadu, “Thalaivan Irukkindran” is going to revolve around political state in the country, according to reports.

As soon as Kamal Haasan decided to make the sequel, he approached academy award winning musician A.R Rahman and committed him for the project. “Vagaipuyal” Vadivelu is the first artist to get committed in the project. He is expected to reprise his role “Esakki” which he played in the first part. The role “Esakki” gained Vadivelu a huge popularity during the initial stage of his acting career. In “Kamal 60” function, Vadivelu said that he highly believes that this film is going to be his “Come back” in Tamil film industry.

Going by the reports, pre production works of this project is on full swing as the makers are using this lockdown period to choose castings. Now the latest update on the casting of the movie said, that actor Vijay Sethupathi is going to appear in a prominent role in the film. A recent Instagram live of Kamal Haasan and Vijay Sethupathi titled as “Thalaivan Irukkindran” conducted as a part of film’s promotional activity. In the live session, Vijay Sethupathi expressed his admiration towards Kamal Haasan and seeked the legendary artist’s advice regarding many aspects of Tamil film industry.

While many are speculating that Kamal Haasan is going to reprise the role similar to Sivaji Ganeshan in the original and Vijay to act as a role similar to “Shakthivel Gounder”, this recent report has said that Sethupathi is going to do the role of main antagonist in the film. Nasser who played main antagonist in “Devar Magan” would get killed by Kamal Haasan in the climax. Now, Vijay Sethupathi is going appear as Nasser’s son in this sequel. It is notable that Vijay played villain for Rajinikanth in “Petta”.

As far as the plot of the film is concerned, Kamal Haasan who goes to jail after killing Nasser in the first part, gets released after doing his time. Vijay Sethupathi, son of Nasser waiting for him to get release and seeks revenge by confronting Kamal Haasan who is trying to serve people by involving in electoral politics. Vadivelu is going to have more screen space and his dialogues are written in a way of trolling the current state of politics in India. A.R Rahman is going to compose music for a proper rural subject after a long time.

The “Bigg Boss” host is going to don a getup similar to Shivaji Ganesan in the original and talks are underway to cast Revathi as one of the three heroines. Andrea and Pooja Kumari are expected to appear in significant roles. The film’s shooting is going to take place in the same house in Pollachi where the first part was shot.

“Thalaivan Irukkiraan” which happens to be the 49th film of Kamal’s home banner Rajkamal Films is going to be shot in 60 days, source suggests. If everything goes as per plan, the makers are eyeing for 2021 Pongal release. It is notable Rajinikanth’s “Annathae” is announced as a Pongal release.