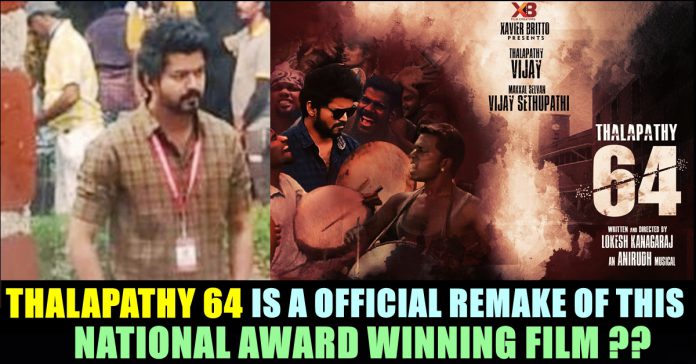 Thalapathy Vijay who is basking in the success of his sports drama “Bigil” is all set for his next venture which is touted to be a Gangster Drama. Since the announcement, the film is making news for various reasons. Lokesh Kanagaraj who also gave a huge success through his recently released “Kaithi” is in full confident.

Actor Vijay is one of the very few actors who has huge fan following in South India. Having acted in more than 60+ films, he is in the top race to become the highest paid actor in Kollywood. As he is currently working for Thalapathy 64 in Delhi, reports suggested that the actor is going to role of a college lecturer according to Indiaglitz. It is also going to talk about the flaws in educational system and the death of NEET aspirat Anitha is also going to take place in the film according to sources.

Now according to recent reports, the yet to be titled film of actor Vijay is a official remake of Kamal Haasan’s cult classic film “Nammavar” in which Kamal played the role of a professor who tries to reform a spoiled brat. According to Valaipechu, actor Vijay felt the story Lokesh Kanagaraj narrated is similar to Kamal’s “Nammavar”. To avoid the consequences in future, Vijay asked Lokesh to buy the remake rights from Kamal Haasan who owns the story of “Nammavar”.

The report also suggests that Lokesh got the opportunity to direct Kamal Haasan in his next film when he went to the office of Raj Kamal Films International to negotiate about the remake rights. Check out the video below from 9th minute :

Produced by XB film creators, the film has musician Anirudh as composer and Vijay Sethupathi is going to do the role of main antagonist. The film also has an ensemble casting which raised the expectation level of the fans.

Check out some of reactions from Internet for this news :

Hope it's not remake of nammavar movie as that movie itself failed one in box office. Only nagesh acting in one scene good otherwise nammavar is waste movie pa #Thalapathy64

It is notable that Nammavar received the national award for Best Tamil film of the year 1994. Thalapathy 64 has commenced with a customary pooja in Chennai with Vijay, Vijay Sethupathi, Malavika Mohanan and Shanthanu Bhagyaraj and the rest of the crew in attendance. The film also has “Angamaly Diaries” fame Antony Varghese. Later the makers added Andrea Jeremiah in the cast crew.

What do you think on Vijay doing a role of a professor ?? Comment your views below !!