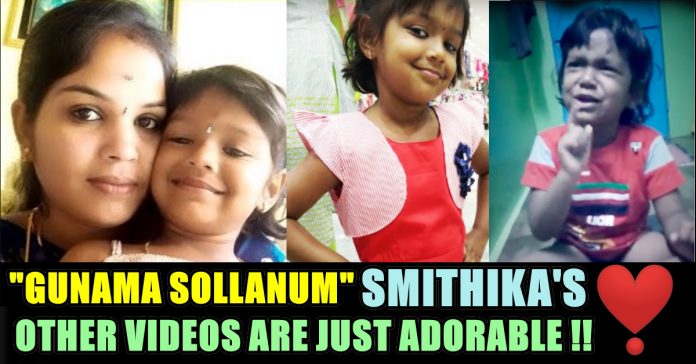 “Smithika is so matured, she is the one who advising us and she also the one who is so emotional who will shed tears often” says proud Mother to the media when she was asked about her daughter who is the Internet sensation of past one week.

“I record the videos of her to show her father who comes from his work. She brought back the snacks without eating which was supposed to be ate her break times of her school. While I asked about it she started crying to which I hit her slowly. That is when she started advising me” she added.

Belonging to Mannarai, Thiruppur Father of Smithika drives Auto for his earnings and her Mother works as  a Tailor in a Textile. “Smithinka is an UKG student who even calls her Teacher as “Aunty”. She always explains the daily happenings in her school for an hour long in a daily manner to which I couldn’t find enough time to listen her. Her favourite food is “Dosa”. She is popular among our neighbourhood and very much interested in knowing Genaral knowledge. She is also very much fluent in “Thirukkural”.

People across the foreign countries also called us and talked to Smithika which makes us really happy” says her Mother. In the video we can also see Smithika being so efficient and energetic. She became the darling of masses with a single video which is evident through so many memes and videos featuring her face across the Internet.