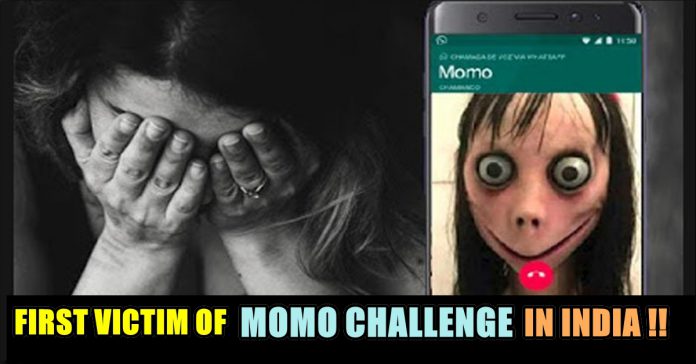 Following in the footsteps of the deadly Blue Whale challenge, the Momo challenge has allegedly claimed its first victim in India. Local police are investigating the role of the treacherous online game in the death of a Class 10 student who committed suicide by hanging herself at her home.

Family members of the victim have demanded an inquiry into the involvement of the online game in the death of their daughter. A report by the Times of India suggests that one of the victim’s friends told her brother how she was excited upon reaching the last stage of an online game. The brother also told the national daily how the girl played the game in her free time at school or during lunchtime. A preliminary investigation into the death of the girl revealed that she slit her wrist before hanging herself. While police officers familiar with the investigation said that in a suicide note recovered from the spot, the girl blamed low grades for taking the extreme step. One officer also said that local law enforcement is probing the role of the Momo challenge in the girl’s death by combing through her internet usage history and personal belongings. Only after a thorough investigation will the probing authorities be able to ascertain whether it was the Momo or any other online challenge that drove the 16-year-old to her death. The deadly Momo challenge has made headway in several countries including America, Argentina, France, Mexico, and Germany. A 12-year-old girl who committed suicide in Argentina was the first victim of this treacherous online game. Represented by the spine-chilling image of a female with her eyes popping out of the sockets, the challenge is capable of surpassing the death toll caused by the Blue Whale challenge. While playing the Momo challenge, players receive instructions from an unknown sender who also sends them disturbing audio and video clips.