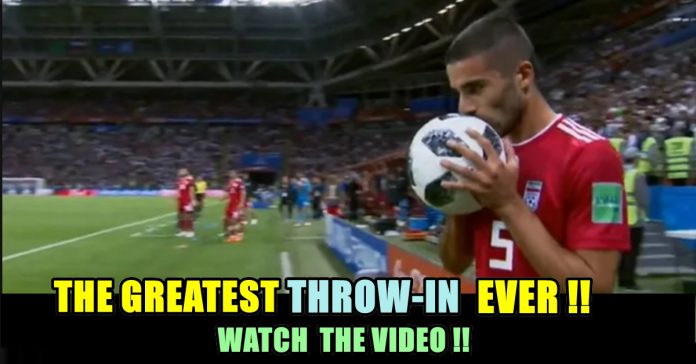 A desperate attempt to salvage a result during the dying stages of a World Cup match has been lampooned by football fans after it failed miserably.

Iran’s Milad Mohammadi kissed the ball for luck before trying a dramatic somersault throw in as his team searched for a goal to draw level with Spain and keep their tournament hopes alive.

As Mohammadi approached the line he attempted the forward flip but he was unable to generate enough momentum to send the ball flying. Then he threw the ball simply as usual , watch the video here :

#IRAESP Iran saved the best part of the match for last😁😁 pic.twitter.com/OQdyRZWqYI

Here’s how the world reacted for his attempt :

There won’t be a better moment in this World Cup 😂 #IRAESP pic.twitter.com/9xgSOSpEys

😂😂😂😂 the guy took approximately 40 seconds to do whatever he did

Well , What do you think on this hilarious attempted Throw-in ??