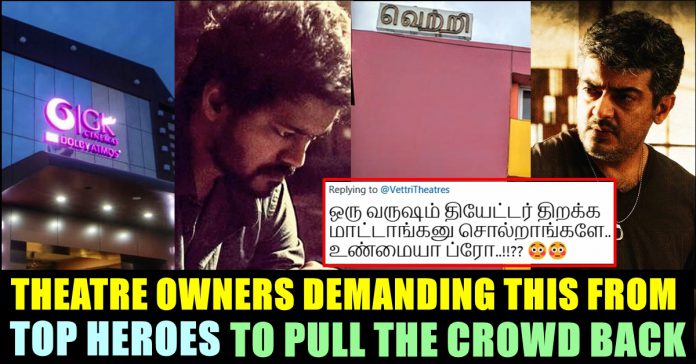 We can’t picture the future of Tamil cinema right now as the lockdown 2.0 is highly believed to get extension after May 3. The last extension was made by the Prime Minister of our country on the final day of initial lockdown period which is 14 of April. The decision was made as the number of positive corona cases in India are increasing day by day in large manner. So far more than 23,000 positive corona cases has been reported in the country.

Daily labours, Industrialists, Entrepreneurs and people working in almost every field are suffering financially due to the Corona outbreak. Owners of cinema theatres are also no exception as it will take at least two months from the end of lockdown for theatres to operate normally. Though if the lockdown ends in near future, theatres will face huge problem in the footfalls of audience as they would think twice before mingling with each other like before after what happened. To make them visit their theatres, theatre owners are planning to renovate their theatres in a way of supporting social distancing in their space.

“Master” which was supposed to get a theatrical release on 9th of April got postponed. Vikram’s Cobra, makers of which released their first look recently forced to reach India while they are shooting in a foreign location. Surya’s Soorarai Pottru and Ajith’s Valimai are also facing similar problems in the production of their films due to the corona crisis. However, even if these films gets a theatrical release as soon as the lockdown ends, there will be no audience to watch it in theatres apart from the fans of the above mentioned actors.

Now, to pull the audience to theatres like before theatre owners are looking for all the ways it seems. Most of their demands are targeted on the top heroes such as Ajith, Vijay and Surya. Popular movie tracker, Ajay Srinivasan, posted a tweet saying that top heroes should think of doing 3-4 movies per year to bring back the audience. He also wanted them to think of doing content oriented films rather than focusing on high budget films.

In the post #COVID19 world (when the cinema industry opens after the lockdown) my wish is the big stars starting to give 3-4 films a year.
Forget the high budgets, shift the focus back to simple & bankable content, give more content to theatres.@Dhananjayang @VettriTheatres

Rakesh Gowthaman who owns Vettri theatre in Chrompet agreed with his point and said “only the big stars & directors can bring the crowd back to the screens …” in his tweet.

Well said , post #COVID19outbreak only the big stars & directors can bring the crowd back to the screens … #Kollywood cinema world is their hands !!! https://t.co/17PeUsOwJo

Ruban Mathivanan of Porur GK Cinemas said that the big stars should think of doing multi star subjects. “Time for our stars to think about #MultiStar subjects!!!” his tweet read.

Time for our stars to think about #MultiStar subjects!!!

To one of a follower who asked about the reopen of theatres, Rakesh said that nothing is clear as of now. “Predictions are very bad” he added.

Nothing is clear as of now … but predictions are very bad ….

Vasu Theatres in Kumbakonam is expecting at least two films per year from the high profile stars.

Well said sir! Atleast they should give minimum 2 movies per year

As online platforms are emerging to release movies directly in their space, theatre owners are looking for all the ways to take control, post COVID 19. What do you think on this demand from the theatre owners ?? Comment your views below !!