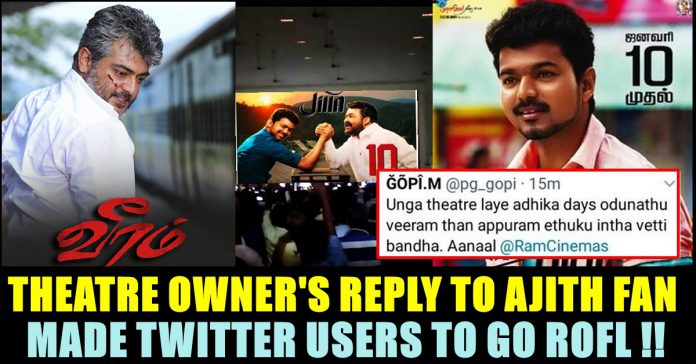 Ram cinemas located in Tirunelveli is very much known their interaction with the followers in Twitter. Theatre owners interacting with followers is not new in Social media platforms. (Also Read : Fan Warned Theatre Owner To Keep His Screen Safe During FDFS Of BIGIL !! Check Out The Reply He Received !!) Now the theatre is celebrating 6 Years of Jilla with a hashtag saying #6YearsOfPongalWinnerJilla with cut outs and banners.

Through their official twitter handle in which they have more than 4 lakh followers, they posted the pictures of the theatre by writing “JillaInRamCinemas 🔥 6YrsOfPongalWinnerJILLA”

This tweet from the twitter handle reached more than eleven thousand likes so far and counting. As we all know actor Vijay’s Jilla released with Ajith’s Veeram on the same day in 2014. On seeing this post, one of a fan of actor Ajith said that the fact posted by Ram Cinemas is wrong by saying that Veeram is the one which performed well in the Pongal contest of 2014.

On seeing this tweet, the owner of Ram Cinemas simply replied by saying that they didn’t release Veeram in their theatre during its release. This reply made many of their followers laugh among which most of them are Vijay fans. Check out their reply here :

After getting such reply from, Ram Cinemas, the user deleted his tweet. However, the screenshot is going viral with hilarious reactions. Check out some of them below :

This Is Called Dream Run 😜😂

The Movie Is Not Released On The Concerned Theatre

“Thalapathy” Vijay and “Thala” Ajith are two of the most talented actors in the cinema industry of Tamilnadu. The rivalry between both the actors is less as far as the rivalry between their fans is considered. Its been a long time since actor Ajithkumar and Vijay declared as official rivals. Only on few occasions both these actors movies released together but on that day the opening for both the movies would be a deadly one.

Though the actors themselves enjoying a healthy friendship between them, verbal spats between their fans has always been a never ending one. Then it took place in movie theatres but now as social media has been an easy accessible one to every smartphone users, it is increasing day by day.