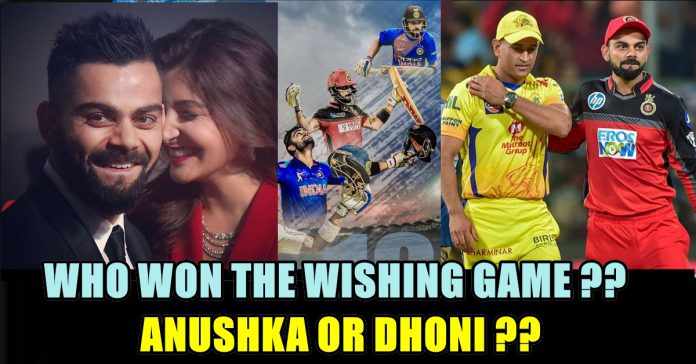 Indian skipper Virat Kohli received wishes from across the globe as he turned 30 on November 5, 2018. While he was hailed by many and was praised for his remarkable services to Indian cricket over the years, Kohli received a unique wish from his former captain and Indian teammate MS Dhoni. The veteran wicket-keeper batsman wished Kohli through a video released by the BCCI on Twitter. After wishing Kohli a happy birthday, Dhoni also had a special request to make from the Indian captain.

In a video shared by the BCCI on Twitter, Dhoni can be seen holding a childhood picture of Kohli with a toy gun in his hand. Dhoni then jokes that the picture is a proof that Kohli is a big PUBG fan, he then asks Kohli to share his knowledge of the game with fellow teammate Manish Pandey, who as per the veteran is not quite good at playing PUBG. Dhoni asks Kohli to teach Pandey some of the tricks before concluding his birthday wish for the captain.

“Hi Virat, I wish you a very, very happy birthday. I know you’re a big PUBG fan. I found this photo of your’s on your phone. Why don’t you come and teach Manish Pandey how to play a first-person shooting game,” Dhoni said in the video which also had other Indian players like Shikhar Dhawan, Yuzvendra Chahal, Kuldeep Yadav and Krunal Pandya wishing Kohli on his 30th birthday.

Wishes galore for the Indian captain from the team as he celebrates his 30th Birthday. Here’s to many more match-winning moments and 🏆🏆 in the cabinet.

The run machine as Kohli is fondly known for his insatiable hunger for scoring runs, was in red-hot form in the recently-concluded ODI series against West Indies as he scored a hat-trick of centuries before cracking the milestone of 10,000 runs and becoming the fastest to achieve the milestone. He overtook legendary Sachin Tendulkar by achieving the feat in 54 innings fewer than Sachin. Incidentally, Kohli also left behind Dhoni to become the 4th all-time highest run-getter in ODIs for India. He has amassed a 10,232 run in 216 ODIs at a staggering average of 59.83 including 38 centuries and 48 fifties. He has been rested for the ongoing T20I series against Windies and will return to action against Australia in the upcoming tour.

Anushka Sharma also wished Kohli in a most unique way. Like no one she said in her official twitter account “Thank God for his birth” with a special photos of them. Check out it below :

Thank God for his birth 😁🙏❤✨ pic.twitter.com/SzeodVBzum

Now tell us which is the most unique way of wishing !! Comment below !!