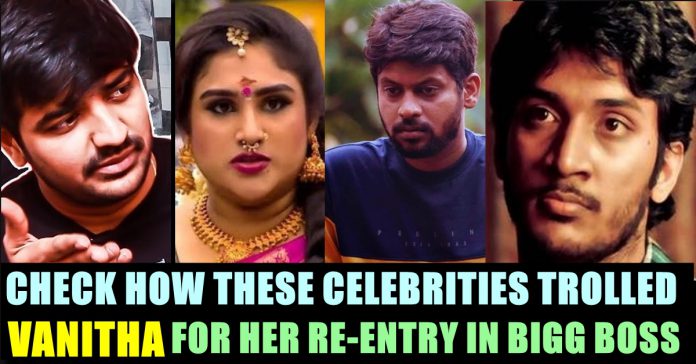 Day 51 of Bigg Boss Tamil 3 began by highlighting the misunderstanding that took place between Mugen and Abhirami. Vanitha, who entered the Bigg Boss house again as a guest, was seen talking to Abhirami about Mugen.

Later, Abhirami and Mugen had a heated conversation. Tharsan, Sandy and Kavin were seen supporting Mugen on the issue whereas Madhumitha, Sherin and Vanitha were seen taking Abhirami’s side. With the other housemates’ intervention, the argument was sorted out and Abhirami apologized to Mugen.

Now today’s three promo suggests fight between Kavin and Madhumitha. Madhumitha who says that male contestants are treating female contestants as slaves, slams him by alleging that he used 4 girls and still stays inside the house.

After Losliya bursting out at Madhumitha, Kavin is seen shedding tears. On seeing these three promos Rio raj, who recently debuted in a film as protagonist took a sly dig at Vanitha’s entry. In his tweet he said “Nalla kolundhu vittu eriyuthu pola 🔥🔥🔥🔥🔥🔥🔥🔥🔥🔥🔥”

Comedy actor Sathish also felt that the mission of Vanith is completed. Check out his tweet here :

Vanitha when ur inisde the house u where making big chaos in the house . Now after seeing all the episode now comming back to house talking like lady Kamal is not cool MA . #BiggBossTamilS3

Vanitha is jus the guest right she will go out right ? Bringing back Vanitha as guest looks so very local . Bigboss nallathan TRP IRUKKU then why this stunts . Vanitha Munnadi pesuviyo pinnadi pesuviyo but pls pesathey . SAINT IN THE HOUSE #bigbosstamil3

Vanitha how can u be so silly these people are inside the house past 51 days. Bus la pathivanthuttu ennama nee. Kavin worth illayam madam neengallum than that’s y ur evicted .

Irony! Women are their own worst enemies .Here is why! https://t.co/mDrdvShTFp

What do you think on these promos released ?? Comment your views !!