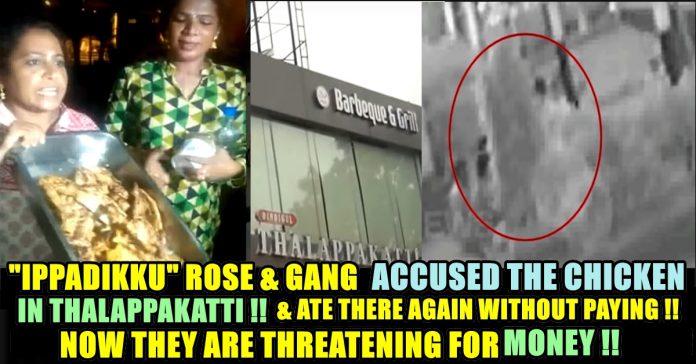 Thalappakatti Briyani Center is one among the famous hotels of Tamilnadu which has a legacy of more than 60 years in Tamilnadu. The hotel faced an unconventional issue from a group of people who alleged that the Chicken of Thalapakatti is rotten at noon and ended up eating there in the evening without paying by threatening the workers. On Sunday noon around 2 pm, Media Person “Rose” and her friend Thulasi went to eat at Thalapakatti which is located in Namakkal Keeranur national highways.

After finished eating, abnormally they started to quarrel infront of the building alleging that the Chicken was rotten and a child was admitted in hospital because of eating it. Few minutes later a group of 10 people joined them who were called by Rose and Thulasi. They started to protest infront of the building and tried to create sensation in order to grab the attention of people around. Most of the people who came as the supporters of the duo are drunk says the hotel administration.

Then they stopped a Patrol jeep which went rounds on the highways road and made the Police officer to close the shop all of a sudden without proper investigation. The Police officer who closed the shop said that he is decided to submit the key to DSP. They did not left the hotel until 9pm where the supporters of the duo blatantly grabbed food from the hotel and ate by sitting in the entrance of the shop. It is also reported that  two of the customers left the hotel without paying reasoning the issue.

After knowing about the issue through Polimer news we approached the  Thalapakatti hotel management. The management said “If the food was really rotten , they should have registered a legal complaint against us, instead they are creating a big time commotion. And they also ate food from the hotel again voluntarily in the evening. No one would do that if the food was really rotten”. “Now they are threatening to spread the video in social media and demanding money from us to be quiet” he added. Later it is reported by doctors through certification that nothing harmful happened to the child whom they portray as the victim in the video. Officer from Food Inspection department, Pushparaj, arrived the hotel as soon as he was informed about the issue. He inquired the hotel administration and inspected the food made in Thalappakatti by tasting it. He said that there is no evidence found for what Rose and Thulasi alleged. He also stated that the duo are called for the inquiry after watching all the CCTV footage provided by the hotel management. The news was telecasted in Polimer news and was deleted later. Here’s the video that surfaced :

It is really shocking that people who alleged that the food was rotten did not made any legal complaint still but ate in the same hotel by threatening the employees without paying bill.

What is your thought on this issue ??