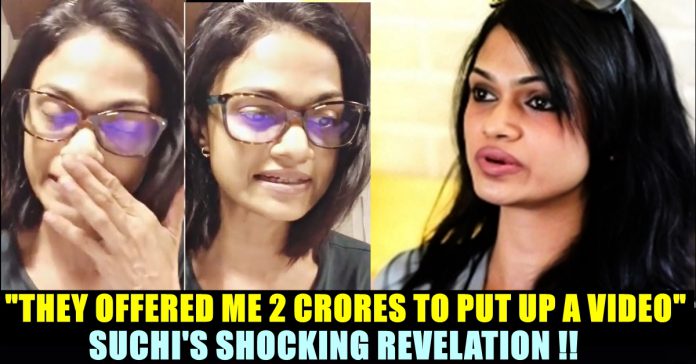 Suchi who was in limelight few years back for all the wrong reasons, is now being lauded by the users of Internet for raising her voice by calling out the police officials who tortured and killed Father and son duo in the Sathankulam town of Thoothukodi district. Now, the singer and radio jockey posted a tweet saying that she was offered Rs. 2 crores earlier to put up a video highlighting police atrocities. However, she refused to reveal the identity of the individual or a political party and asked her followers to focus on “Justice For Jayaraj And Fenix”

Singer Suchi whose video on Sathankulam lockup murder case helped the issue to get global wide attention, is constantly raising voicing for the issue. Followed by Kollywood celebrities, the horrific lock up death of Jayaram and Bennix in Sathankulam of Thoothukudi made people across the country to mourn and react in a furious way. Days after the report on the custodial death of the father and son duo surfaced, known faces and influential personalities across the country who are having huge number of followers for their official social media accounts, started raising their voice. They requested public to join hands together to seek justice for the injustice took place. The main reason behind the wide attention is a video made by singer Suchithra who narrated the whole incident in English language, to make everyone in the country aware of the issue.

This is heartbreaking .I am disgusted. This kind of brutality is inhuman and no one has the right to treat another life in this manner .Makes me sick to the stomach. Strength to the family members of the deceased .This should not be tolerated. I demand #JusticeforJayarajAndFenix https://t.co/pPwC2ME8Vr

Actress Priyanka Chopra who currently works for hollywood film industry, condemned the act of the police officers and said “No human deserves such brutality, whatever be their crime.” only after seeing the video posted by Suchithra. Many other celebrities including Shikar Dhawan, Harbhajan Singh, Taapsee, Rakul Preet reacted to the issue after her video went viral.

Now, in this her recent tweet, Suchi has exposed that she was offered 2 Crores “when the opposition was in power”. “Been offered 2C to put up a video highlighting police atrocities in an earlier regime (when the opposition was in power) and lost sleep ever since. This is the lowest I’ve seen humanity dip. But not lower than the #sathankulam incident. Keep the focus” her tweet read.

Been offered 2C to put up a video highlighting police atrocities in an earlier regime (when the opposition was in power) and lost sleep ever since. This is the lowest I’ve seen humanity dip. But not lower than the #sathankulam incident. Keep the focus #JusticeforJayarajAndFenix

Many of her followers asked her to reveal the identity. “EXPOSE HIS NAME TO THE Income tax department for further probing it.” wrote one of her follower.

EXPOSE HIS NAME TO THE @IncomeTaxIndia for further probing it.

Suchi leaks is back

Expose them ….why ur hiding them??

What is the purpose of hiding his identity unless there is some motive? U want Tuticorin cops 2 B punished, perfect but why protecting this black sheep?