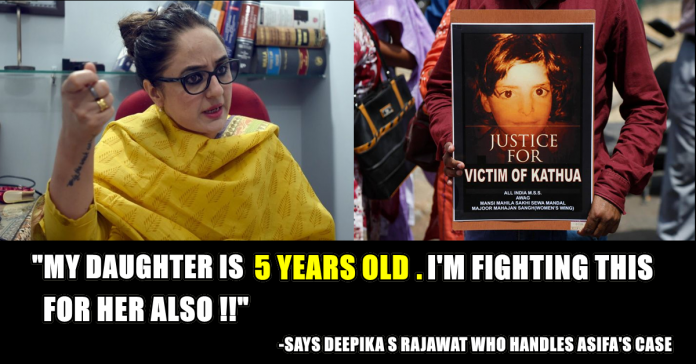 Deepika S Rajawat, who is fighting Asifa’s case, says that she has been facing threats from fellow lawyers in Jammu. Rajawat (38) is chairperson and founder of Voice for Rights, an NGO which works among underprivileged women and children.

On Thursday, she accused Jammu Bar Association president BS Slathia of threatening her.

“I am not a member of the Jammu Bar Association. But on Wednesday, Slathia asked me to stay away from the case while I was going to the court. I am not answerable to him, I am only answerable to my client,” she told TV channels. “I am not scared, but I am not feeling safe either. Protestors (lawyers) are trying to put pressure on me so that I don’t fight for justice.

But I will continue to fight Asifa’s case. I have full faith in the police investigation,” Rajawat told TV channels. She said she had written to the Chief Justice of Jammu High Court seeking security.

On the desk in a small room of her house in Jammu, there is a framed photograph of a chubby, smiling girl. “That is my daughter,” Deepika Singh Rajawat said. “She is five years old and her name is Ashtami. I am fighting this case also for her.” Not one to be cowed into silence, she went on Facebook a day after the incident on April 5 and wrote: “The president of the Jammu High Court Bar Association mistreated me. He used unparliamentary language and threatened me not to appear in cases during a strike by the lawyers.”

Showing TOI the copy of a letter she received from the Jammu & Kashmir HC on Saturday that asks the in-charge of the security wing of the court to provide her protection during her appearances, she said, “But when I confronted the senior advocate and told him that I can fight any case I want, I was told there are ways to stop me. But this letter from the high court gives me strength even though there is a corner in my heart that is a little afraid. These are powerful people.”

“I don’t know how long I will be alive. I can be raped…My modesty can be outraged. I can be killed, I can be damaged. I was threatened yesterday that ‘we will not forgive you’. I am going to tell the Supreme Court tomorrow that I am in danger,” Ms Rajawat said on Sunday.

Rajawat had earlier also filed a complaint on the issue with the Chief Justice of J&K HC and Chief Justice of the Supreme Court. She said she was not safe and she had no idea how long the protests by the lawyers’ body would go on. The case, in the Kootah court right now as Rasana comes under its jurisdiction, saw a dramatic turn when recently lawyers tried to stop the chargesheet, which narrates in detail the crime against the Bakarwal girl, from being forwarded.

Asked if she is confident she will win as the crime branch, which is probing the rape-murder, has lost precious forensic evidence (the girl’s body was allegedly bathed and her clothes washed soon after she was found), she said, “It’s really messed up. The first few days after the crime was detected, some dreadful things happened. The local police station did not file an FIR. That happened only after 2-3 days. On January 17, her body was found. Then the ‘clean-up’ began. It was being hushed up. The policeman who did this is one of the eight accused.”

“We don’t think there is conducive atmosphere in Kathua for the trial,” said Ms Rajawat.