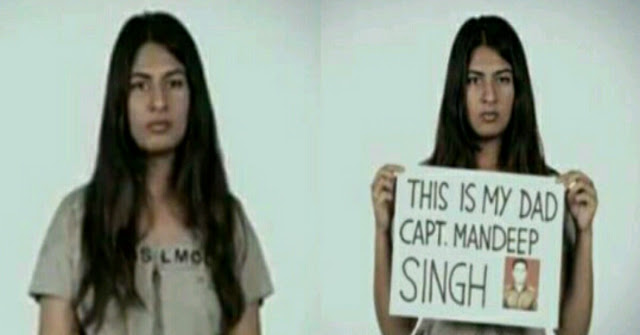 This is a story of a girl who lost her father when she was two-years-old. Gurmehar Kaur’s father, Captain Madeep Singh died in the line of duty during the Kargil war. In a video made and shared by Ram Subramanian, Kaur tells us her story, where she talks extensively about her childhood.

Kaur’s  does not talk in this video but takes out placards that display some facts about her life.

Kaur has very little memory of her father, but what she has, are memories of growing up without him. She remembers hating Pakistan and all Pakistanis and even hating Muslims, assuming they are all Pakistanis and hence were responsible for her father’s death. Kaur made these assumptions based on the conversations that revolved around her father’s death. In fact, there was a day when full of hatred, she tried to slam a Muslim woman wearing a Burkha.

However, Gurmehar, who lost her father in war, has the most sensible and mature take on the issue.

We can only hope that her video shows a way to people who are instigating hatred unreasonably.