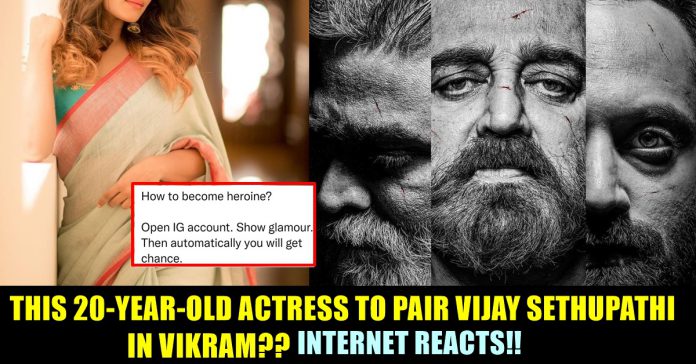 Biggboss is known for opening a gate of opportunities to the participants. A participant of Biggboss, an active Instagrammer, and television soap actress Shivani is expected to be acting in the movie Vikram. If the sources are true, this 20-year-old actress is pairing up with Vijay Sethupathi. This news has created a heavy blow among the fans.

After his movie Master with Actor Vijay as the hero, Lokesh Kanagaraj is directing Vikram with Actors Kamal Hasan, Vijay Sethupathi, and Fahadh Faasil. Ever since the movie was announced it created huge excitement among the fans. Everyone is eagerly waiting for the announcements from the crew. The first look made the guessing game begin with the mention of ‘Code Red’. When it was released, fans were curiously decoding the mention of the same in the poster. The movie is produced by Kamal Hasan’s production company Raaj Kamal Films. Actors Kalidas Jayaram, Narain, Antony Varghese, Arjun Das are also expected to be starring in the movie.

The news about Bigg Boss fame Shivani acting in Vikram as the pair of Vijay Sethupathi has slowly started to catch the eyes. An image of Vijay Sethupathi and Shivani standing together was released adding credibility to the news. The highly dismayed netizens are showing their dissatisfaction online. However, some of Shivani’s fans and well-wishers are welcoming the news. Casting Shivani in a humongous movie like Vikram with remarkable actors has created a lot of speculation. People are questioning the decision of roping a fresher in this film. Questions like ‘How?’, ‘Why?’ are popping up inside most of the fans.

How to become heroine?

Open IG account. Show glamour. Then automatically you will get chance.
Then malavika, now Shivani

This news has started trending on Twitter. The actress has also shared a screenshot of the same on her Instagram story, letting her 3 million followers know. Supporters of the actress have shown their contempt for the hateful comments.

Many people are happy for her success.
But still some couldn't handle this news.
Grow up & live ur life .

Love or Hatred is doesn't matter for her.
She will keep on flying high,chasing her Dreams & she would never stop for the people who doesn't believe her.
#shivaninarayanan

People opine that testing an inexperienced actress in a project like Vikram is not appreciable. The majority of people are showing their dissatisfaction with the news. As far as a movie like Vikram is concerned, most of them feel casting Shivani, who doesn’t have a sounding career isn’t a good choice. We come across tweets that are highly against roping in a fresher who is known primarily for her Instagram posts.