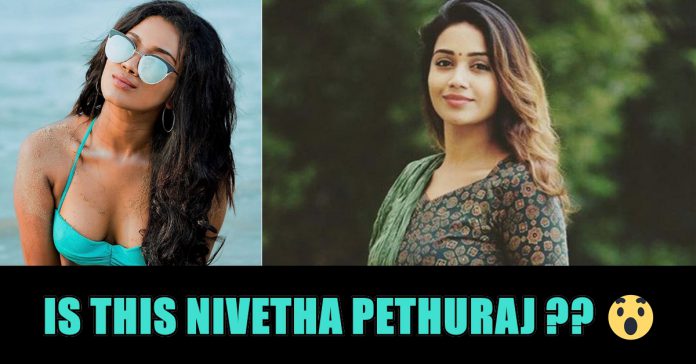 Actress Nivetha Pethuraj, known for her movies such as Oru Naal Koothu is predominantly appearing in tamil language films, issued a strong statement against those who spread pictures of a model, whose looks were similar to the actor’s. Due to this confusion, several media houses and netizens shared the pictures claiming it to be Nivetha Pethuraj. On Monday, Nivetha,  in an angry statement, clarified that the images are of another aspiring actress.

Model-turned-actress Nivetha Pethuraj, who shot to fame with her performance in her debut film ‘Oru Naal Koothu’ is angry and frustrated after pictures of a model in bikini began doing the rounds on social media. The model has an uncanny resemblance to the actress which made certain section of the media also reporting Nivetha as the person in the pictures. The woman in the pictures is not actually Nivetha Pethuraj. In a press statement, the actress said, “For the past few days some section of the media were constantly using the images of some aspiring artiste and had been using my name, thus creating an impression that it was me who is seen in that picture. This was brought to my notice by many calls from well wishers and friends. This deliberate attempt to malign my image has hurt me very badly.” “I am in touch with my legal team to handle this issue. Considering the huge respect I have for the media, I had been maintaining a dignified silence. But it looks that there is no respite from this irresponsible act,” she added. “May I request them to verify and carry the news and images of the concerned artiste. After all we are also human beings and we have a family too. We too live in a society which have bearings on our day to day life. I hope this will put things on a straight line. Any further repeated acts according to my legal counsel will invite legal proceedings,” concluded Nivetha. On the career front, Nivetha Pethuraj is now awaiting the release of her next film, Tik Tik Tik, which is slated to hit the screens on June 22.
This is to clarify that the picture circulating as Nivetha Pethuraj isn’t her, Its a model named Varshini Pakal & the photo was uploaded by Prashun Prashanth, Photographer.