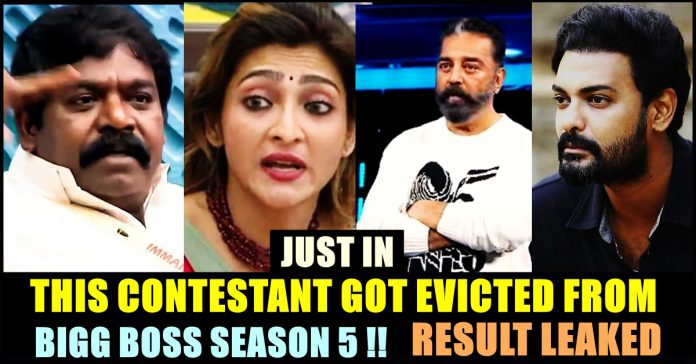 Bigg Boss elimination result of this week got leaked among the users of the show. Abhinay Vaithi, Akshara, Ciby, Imman, Mathumitha, Pavani, Raju are the contestants who got nominated for the eviction. Last week, Suruthi, one of the strong contestants of the show got evicted. The show has saw the evictions of contestants such as Abishek Raaja, Chinna Ponnu, Nadia Chang, Suruthi so far. Namitha Marimuthu walked away from the show due to unknown reasons.

The three promos that were released for the Saturday episode, shows Kamal Haasan promising contestants on what are the rules and restrictions are.

The second promo showed Kamal Haasan talking about how contestants of the Bigg Boss show are proving that it is not a scripted show.

In the third promo, Kamal revealed that Raju got saved from the eviction through the excess number of votes he received from the viewers of Bigg Boss. Here’s the promo :

Now, as far as the elimination is concerned, it has been revealed that Madhumitha got evicted from the show. Madhumithais a fashion designer by profession is also a model. She who was born in Sri lanka was brought up in Germany. She was pretty much active inside the Bigg Boss house along with Pavni and Suruthi. However, the model failed to grab enough screen space for herself which could have resulted her eviction.

Check out some of the reactions that surfaced for Madhu’s eviction :

#Madhumitha evicted
Great Decision from BB5 , it is good for her to live happily in Germany ❤️#BiggBossTamil5

Apart from this she's sweet & good #human, All the best for her🥰#BiggBossTamil5 #BiggBoss5Tamil

Eliminating #Madhumitha is so disappointing! Capable females are evicted back to back 😡

I was expecting Imman or Abhinay.
But Abhinay is a smart player though, he knew which kinda players will be eliminated first 🤣
Vamsa vazhi vaazhga! 😜#biggbosstamil5 https://t.co/yQL5JF4yUw

#Madhumitha is evicted it seems!!