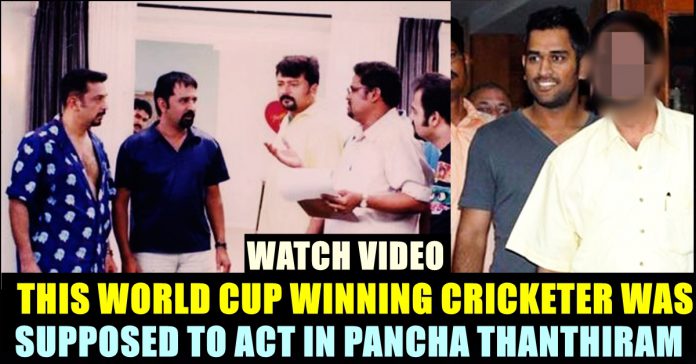 Many movies of actor Kamal Haasan which was a box office dud turned out to be a cult classic among the fans of cinema after years. Anbe Sivam is one of the best example to make us realize that we missed to celebrate the movie in theatres. Among many of his movies such as Virumandi, Hey Ram, Panchathanthiram also a movie that is being celebrated by the fans of Tamil cinema, years after its theatrical release.

Panchathanthiram is a movie with ensemble cast of having 5 male leads including Jayaram, Sriman. The film was directed by K. S. Ravikumar written with Kamal Haasan and Crazy Mohan. The film features Haasan, Simran and Ramya Krishnan leading an ensemble cast that includes Jayaram, Ramesh Aravind, Sriman, Yugi Sethu, Urvashi, Aishwarya and Nagesh.

Now an interesting fact about the film has been surfaced in the function of launch of ’83 the movie which took place in Chennai. Team ’83 are busy in promoting their film across the country. Staring Ranveer Singh in the role of legendary cricketer Kapil Dev, the film is going to recreate the historic world cup win of Team India in the 1983 world cup. The also has Tamil actor Jiiva in the role of Krishnamachari Srikkanth. As a part of the promotion, Team ’83 landed in Chennai and participated in the event which had Kamal Haasan as a chief guest. It is notable that Kamal’s Raaj Kamal’s International is going to distribute the film in Tamilnadu.

Along with the movie crew and Kamal Haasan, cricketers Kapil Dev and Krishnamachari Srikkanth also took part in the event which grabbed the attention of the makers. To our surprise, Kamal revealed that Srikkanth who is one of an important player of the world cup winning team, was supposed to act in his movie. Kamal revealed it in front of the 83 crew and the audience. Srikkanth is currently doing commentary in Star Sports tamil.

“I tried to make him act in my films” said Kamal Haasan who was interrupted by Srikkanth. The former cricketer said that he was supposed to do the role of Yugi Sethu. “I accepted to act in the film initially. But stepped back at the last minute due to fear” said Srikkanth. Kamal further revealed that he wrote a character for Srikkanth in “Aboorva Sagotharagal” and removed it later. The actor even said that he copied a eye blinking gesture of Srikkanth and imitated it in his “Meendum Kokila” film. While Kamal Haasan was giving his speech, Srikkanth requested Kamal to give him a role now and assured that he will do it bravely.

Many cricketers stepped into acting after completing their career in sports. Sadagopan Ramesh, Lakshman Sivaramakrishnan, Sreeshanth are the primary examples. What do you think on Srikkanth making his Kollywood debut ?? Comment your views below !!