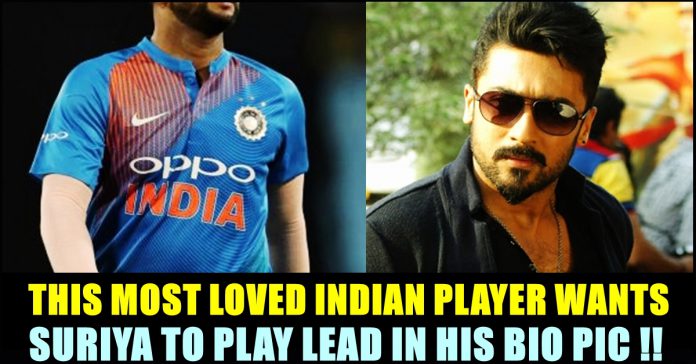 Former Indian player and current Chennai Super Kings player Suresh Raina who is fondly called as “Chinna Thala” by the fans of Tamil nadu, in a recent interaction with anchor Bhavana, expressed his wish of Tamil actor Suriya playing the lead role in his biographical picture. The cricketer who recently released his autobiography ‘Believe – What Life and Cricket Taught Me’, said that someone from South who can understand the emotions he has for CSK should play lead in his biopic. He also named South Indian actor Dulquer Salman as one of the options.

Making biography movies for sports personalities became a trend in Indian cinema since Indian former cricket team captain Mahendran Singh Dhoni’s biography “MS Dhoni, The Untold Story” became a blockbuster across the nation. With cricket being the most celebrated sports compared to all in India, a film is being made on the successful event of India winning world cup in the year 1983. A documentary sports film based on Sachin Tendulkar was made with the title “Sachin: A Billion Dreams” as well.

Talks are doing rounds to make biography films on Salem express Thangarasu Natarajan, former captain Mohammad Azaruddin are doing rounds as well. Now, in a recent interaction with Tamil anchor Bhavana, Suresh Raina expressed about his wish. “I really want someone who can take that emotion. Playing sports for the country, Playing sports for Chennai Super Kings is not easy” Suresh Raina said in the interaction.

“I really want someone from South who can really do it. Someone who can understand how Chennai belongs to me. How Chennai Super kings belongs to me. I have two, three names” said the left hander. “Probably my favourite Suriya. He can play as he is a cricket fanatic person. Dulquer Salman is a good actor. I have seen couple of his movies” Raina said.

" If my biopic is made, someone from south may be my favorite @Suriya_offl can do the role" – @ImRaina 💙#Suriya40 | #VaadiVaasal | #Suriya pic.twitter.com/bWUqTHBoN2

Suresh Raina played for Indian team, a very long time ago. Being a left hand middle order batsman, Raina enjoys a massive fan following in India despite of his absence in the national team for years. Fondly called as “Chinna Thala” by Tamilnadu fans, Raina represents Chennai Super Kings in Indian Premier League and even captained the team occasionally. Apart from his aggressive batting, Raina is known for his terrific fielding efforts and considered as one of the best fielders in the world till date. It is notable that the cricketer identified himself as a Suriya fan in many occasions.